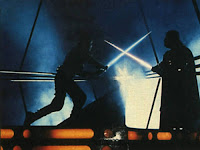 A son and father face off this weekend. A father/son rivalry hasn't been this intense since The Empire Strikes Back!

My dad is a rabid Giants fan... has been since they were in the Polo Grounds.
I live and breathe the Red Sox... and haven't abandoned them even when I lived in the Bay Area for a Giants/A's World Series and lived in New York for a Mets/Yankees World Series.

The Red Sox and Giants face off...
And it should be an interesting weekend here in the Bay Area. Not sure if I should even watch them with my dad or not.

Both teams are desperate for hitting.
My God these could all be 2-1 games!

Both teams also need a win...
Although my dad keeps reminding me "I thought you never needed a winner after 2004! I need a winner now!"

And dad used a bit of passive agressiveness last night that I don't think Vader would ever use. He said "If you love me, you'll root for the Giants this weekend."

Man. Vader never tried to pull that off. He just chopped off Luke's hand.