A's fans... you can't possbily be happy about your TV situation 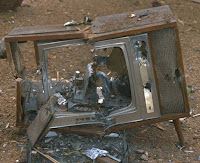 As a sports fan, this is the second coolest time of the year to sit down and watch TV.

The best time will always be October and seeing playoff baseball.
But watching baseball and the NBA playoffs and Stanley Cup playoffs all at once is a close second.

So today I had 3 hockey games, 4 basketball games and 3 baseball games to choose from.

Now seeing that I live in the Bay Area, you'd think one of the games I'd be able to see would be the surprising Oakland A's playing the equally surprising Kansas City Royals in Oakland at 1 PM.

If you thought that, you'd be wrong.
Oh I could watch the Dodgers and Braves play... and the White Sox and Rays play (always a tradition filled game.)

But a baseball game played 40 minutes across the Bay from my house was not shown.
It said right there in the schedule... No TV.

That makes no sense to me. No TV should be said to my kids when they are acting up, not to a Major League team.

I have 400 someodd channels on my cable system.
Kick that replay of the poorly miked Mountain View City Council meeting off the air and show the A's!

Last year I expressed my disbelief over the lack of TV coverage.
And my buddy Liam tried to do something about it on The Nosebleeds...

But the A's have nearly one game a week not on the air!
Next week they have two non televised games.

And this isn't a new thing either... in 2006 the A's won a wild game against the Angels when Frankie Rodriguez missed the ball being thrown back from the catcher. And it wasn't on TV! That A's team got all the way to the ALCS and still can't get all of their games on the air.

Where is the outrage?
I need to hear it from passionate A's fans. The product is a good team so far and I know there are loyal fans out there.

Does it piss you off?
Are you resigned to it?

I want to hear from the Elephants in Oakland!

I need to hear from Big Al Gonzales, one of the funniest comics in the Bay Area and a big A's fan. It MUST piss you off!

The podcasters at Mean in Green must be angry.

What about Ken Arneson at Catfish Stew? Are you going to take being second class citizens?

There are hundreds of people posting at Athletics Nation every day... so why aren't they screaming at Comcast to show the games?

Let me hear from you. I know you fans can be passionate. I've been in the Collesium for 3 different Red Sox/A's playoff games and I know you love your A's.