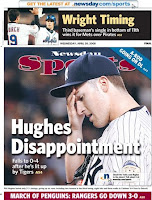 So the Yankees phenom Phil Hughes has stunk so far this season.

Nothing to be alarmed about... a lot of terrific pitchers start off horribly.
Greg Maddux finished up his rookie status with an 8-18 mark and a 5.59 ERA.

And not to let their parter in titles get away Scott free... John Smoltz started his career 2-7 with a 5.48 ERA.

All three are going to the Hall of Fame.

Who knows if Hughes will join them, but right now he seems like a guy who is overwhelmed by the pressure and is 0-4 record with a 9.00 ERA and allowing 34 hits and 13 walks in 22 innings (less than 4 innings a start).

The Yankees have only 2 options:

1. Stick with him and gut it out and say "Hey, it's a transition year. There's nothing left for him to do in the minors. These are growing pains."

2. Send him to the minors to get his confidence back and to take him out of the glare. He WILL be an ace... he's just not ready yet.

Well, of course I forgot the third option... the Joe Borowski option.

Pretend he is hurt!
Yeah... that's it.
They aren't sending him down... that would make Prince Hank Steinbrenner even more angry that the Yankees didn't send Hughes to Minnesota for Johan Santana.

When I read he was being sent down (a day after saying he felt fine) all I could think of was the scene in Caddyshack when Rodney had the ball hit him on the arm while he was playing lousy. I almost expected Hughes to pause awkwardly and say "Ow my arm!" 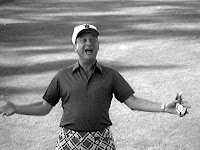