I should address some of the comments about my Mets entry... 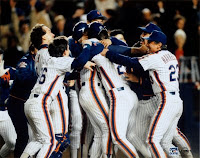 Well I must say the response to my Home Grown versus Acquired All Time Mets Team entry has been terrific.

Some people complimented the list and the writing.
Others questioned how severe my mental retardation was.

I love both responses (and man they are more passionate than the Rangers fans responses.)

But let me address some of the questions that have come up more than once:

1) THE PIAZZA VERSUS CARTER DEBATE 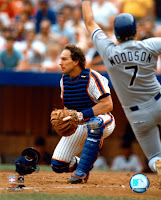 Trust me, I weighed the pros and cons of Carter and his Hall of Fame credentials and his contributions to the 1986 World Series title are something I remember ALL TOO WELL!

And every time I put my foot down and said "It's PIAZZA!" I would think "But wait... Carter was great."

I think the knocks on Piazza's defense was overrated. He had a lousy arm (but it's not like he was Mackey Sasser!)
But he also seemed to call a good game and the pitchers didn't seem to mind.

I needed an intangible to break the tie...
Carter's was starting the rally in game 6.
Piazza's was that post September 11th homer.

I'm a Red Sox fan who was in New York on September 11th.
I guess I picked from emotion. 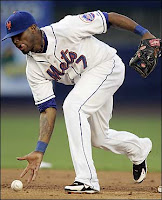 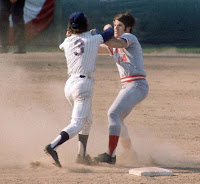 Yes I am aware that Jose Reyes is more talented than Bud Harrelson... but I put Bud in front for a few reasons.

First of all Bud was the shortstop for the 1969 World Champion Mets.
Jose has been the shortstop of two of the biggest collapses in recent memory.

I gave credit to them being such a major part of the team besides as a player. Bud has a World Series ring as a Mets player and as a coach (he was in the scrum at home plate when Ray Knight scored.)

I guess this is a bit of "We can boo our guy, but YOU can't say anything bad about him."

Man, I knew Hojo was popular... but I am surprised how little love Ray Knight is getting!

Come on! He was the MVP of the most memorable World Series the Mets have ever been in!


But for the people who wrote really strongly worded e mails about those three debates, please keep in mind 2 things:

2. It's just a subjective list on a lunatic's baseball blog. It isn't a real team!


Now some of the other points are worth addressing as well.

I thought long and hard about this one... and I decided to leave them off for a couple of reasons:
- Pedro really only gave the Mets one good season. And that season wasn't better than Ojeda's best, Darling's best, Cone's best, Leiter's best nor Hampton's best. You won't find a bigger Pedro Martinez fan than me, but his time in New York was Frank Viola-esque.

- Santana has a better argument and will probably be on this list if I do an update of it. But each of the names on the list had a big post season moment for the Mets.

- I am amazed how few people liked the Mike Hampton pick. Maybe I put too much weight on postseason performances, but if you clinch the National League Pennant with a complete game shut out and win the playoff MVP... you are getting honored on my list. It's a good goal for Johan to match.

5) WHERE IS CARLOS DELGADO? 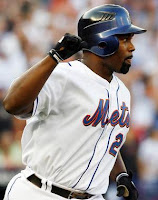 Another tough one...
And with a little reflection I probably should have put Delgado over Dave Kingman.
I just gave Kingman the nod because he twice held the Mets single season home run record and he was a lot of fun.

I can't say all of my decisions are based on logic! But I grant you... Delgado is worth bringing up.


6) WHERE IS JOHN OLERUD? RICO BROGNA?

I thought about Olerud, but I knew I had Hernandez at first and I wanted to honor Donn Clendenon.
So it basically turned into a log jam with Delgado, Olerud and Dave Kingman.

As for Brogna, look... he was a good fun player during a dark age for the Mets. But there's no way he bumps Hernandez, Kingman, Delgado, nor Olerud off of the list. 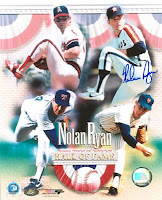 An anonymous poster wrote "Hey if Ryan can make the All-Homegrown team, then why not have Warren Spahn, Yogi Berra, Willie Mays, and Duke Snider on the All-Acquired team???"

A fair point... Ryan's stature on the club is increased by what he did with the Angels, Astros and Rangers.

But in Ryan's defense, he came out of the bullpen to clinch the 1969 pennant and got a key save in game 3 of the World Series.
So he DID contribute the Mets title.

And who else would you put in the homegrown starters?
Paul Wilson? 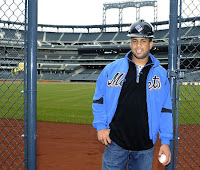 Read it and weep... Benitez phase 2 is about to begin.


9) GIVE JERRY GROTE SOME LOVE 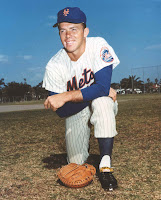 Fine, which catcher do I drop?
Piazza or Carter?

And I'm sorry poster who asked ". He only played in 103 games before the Mets got him, so can't we say he was home grown?!?"

These are MY crazy rules and I stick by them! 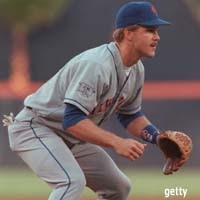 I was living in New York when Kent played. He was as popular in Gotham as Gerald Ford circa 1975.
His numbers skyrocketed when he was in San Francisco (hmmmmmm).

Besides, Felix The Cat Millan was loved and pretty cool.

Pat in Virginia pointed out that Kranepool wasn't an original Met. He was recalled later in the season.

It's a good thing I had Richie Ashburn, a real original Met, honored. 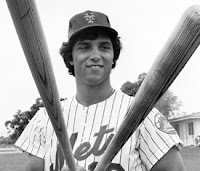 Perhaps, but can you think of another reason to go to Shea Stadium in the post Seaver-pre Strawberry days?

But thanks for reading it.
I was hoping for debate and some passion.

Thanks Regis at Mets Blog, the fellows at the 'Ropolitans, ND Nation, and anyone else who linked me.

Funny... the Marlins and Rangers posts didn't attract this much attention!