Let me get this straight about the A. J. Burnett signing.... 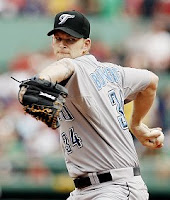 They signed him to a five year deal?

A guy who will be 32 years old and spent his twenties battling injuries left and right is someone the Yankees think will be still worth it at age 37?

What happened to the Yankees getting younger, cheaper and hungrier?

The only hunger on display with this Yankees team will be when A. J. gets hurt and CC Sabathia contemplates eating him.

Wasn't it just a year ago Brian Cashman was preaching patience with the young kids and proved it by holding off dealing Hughes and Kennedy for Johan Santana.

Well after those guys tied CARLOS Santana for wins, I guess it means go back to the old formula:

Find a guy who has had a fluke like good year and sign them for the big bucks.

That certainly worked with Carl Pavano, Jaret Wright and Chris Hammond!
It worked with trades for Kevin Brown and Randy Johnson!