Umm... Unit. Do you know what you are getting into with the Giants? 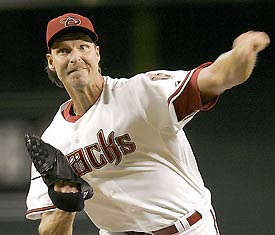 It must be frustrating for you knowing that you are only 5 wins away from the magical number of 300.
You are probably thinking "Christsake, I may not be in my prime anymore but I can squeeze out 5 wins somewhere! ANYWHERE!"

And I guess to prove the "Anywhere" part you picked the Giants.

Look I know you are from Northern California and AT&T Park is a great place to pitch, but the offense on this team is so bad that you'll HAVE to pitch like you are in your prime to squeeze out 5 wins.

Their biggest offensive weapons are Aaron Rowand and Fred Lewis.
Read that sentence again and try to think about how little run support you are going to get.

Barry Bonds? These guys don't even have Gary U. S. Bonds.

This may look like that 2004 season you had in Arizona... which was actually one of the best in your career.

You were among the league leaders in every category and would have won your 6th Cy Young award if you had any run support. But instead you went 16-14, constantly losing games where you threw 7 innings or more and giving up 3 runs or less.

You had to be perfect that year... and on May 18 you were with your second career no hitter and first perfect game.

Look, you don't need 300 wins.
You are going to the Hall of Fame right now.

You have 5 Cy Young Awards, a World Series MVP, the highest strikeout to innings pitch ratio in the history of baseball, you are second only to Nolan Ryan in career strikeouts.

And you did this in a steroid filled, small ballpark hitters era.
My God you played the bulk of your career in the Kingdome. That place was such a bandbox that I think I have 3 career homers in the Kingdome and I've never even been to Seattle.

I wish you luck, Unit.
I've been a big fan of yours (save for your two uncomfortable years in the Bronx.)

I hope you can get 5 wins by the Bay.
Win #5 might be in September.

(And light a fire under Barry Zito's ass while you are at it.)