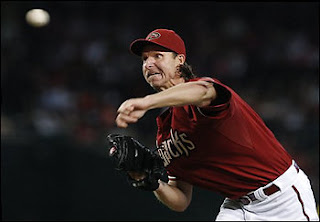 I just finished typing my last post about Randy Johnson when I started talking to my dad about Randy Johnson.
My dad as my readers will know, is a huge San Francisco Giants fan and follows them every night, even in a lousy year like 2008.

And as my dad as a way of cutting to the heart of the matter, he muttered something that might be right on the money.

SULLY: You guys made a move yesterday.
SULLY'S DAD: Yeah. Randy Johnson. I wish they'd make him the closer.

He would be an amazing closer.
Air it out one inning at a time in AT&T Park.

With Tim Linecum, Jonathan Sanchez, Matt Cain and the most expensive #4 starter in baseball, Barry Zito the Giants have a solid rotation.

And Bryan Wilson can pile up saves, but he hardly strikes fear in the hearts of hitters.
Jeremy Affeldt is a good set up man.

But imagine the Giants have a lead (OK... hard to imagine but anything can happen) and who comes out of the Pen but THE SINGLE SCARIEST PITCHER I HAVE EVER SEEN IN MY LIFE!

If the Giants are going to be the surprise team of 2009, then they will have to be an all pitching and defense team.
And along the way, a closer tends to pick up 5 or 6 wins.
Maybe he'll come into a tied game and the team scores in the 9th.

Maybe he'll blow a save and they'll get two in the 9th.

Either way he'd get his 300 wins, the Giants would have a deep and scary bullpen to go with their deep and solid rotation...

If only they listen to my dad!