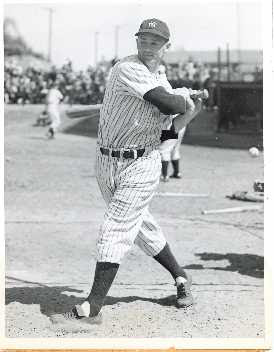 Joe Gordon is a Hall of Famer!
HOORAY FOR HIM!

He won't be celebrating much because he's been dead for the last 30 years.
He hasn't played a game in 58 years and unless there has been a review of his stats a la Mr. 3000 his numbers haven't changed since Harry S Truman was President.

So why the wait, folks?

Seriously... if the numbers were there why did it take to the point where he's honored when nobody has any memory of seeing him play?

He was an MVP candidate almost every year he played. Yeah he didn't play all that long... he missed a few years... FIGHTING IN WORLD WAR II!!!!!

Where does "defeating fascism" figure into your sabermetrics analysis?

Plus he was versatile.
Not as a player (he mainly played second base) but he was a gymnast! And he could play the violin!
Maybe he could have played the violin at the Hall of Fame ceremony.

This isn't a posthumous honor like for Roberto Clemente or what Heath Ledger will probably get at the Oscars this year.
His death isn't a shock.

And it's not like he played for an obscure Negro League team that has been denied recognition over the generations.
He played for the f---ing YANKEES!
He played with Lou Gehrig and Joe DiMaggio and Phil Rizzuto!

Look, I'm not saying open the doors for everyone in the Hall. But if someone belongs, let them in!
His kids are old at this point.

I'm sure this is a great honor for the family... but wouldn't it have been better if he were alive?
Quit the snobbery about the Hall of Fame voting and let's prevent another situation where the kin of a player twists for 3 decades.

It would have been nice to hear him play that violin.