I always get in trouble when I criticize the Pirates, but...

You can never accuse Pirate fans of being apathetic... at least not the ones who read what I write. As I've said before, I like the Pirates and want them to do well. And I hope that Neal Huntington helps assemble a winner and Clint Hurdle manages them back to the post season.

But whenever I point out that their trades have left something to be desired or the team doesn't look that good for next year, MAN do I get hate mail.

My article for The Hardball Times got a FLURRY of people trashing me for insinuating that the Pirates weren't in great shape and that GM Neal Huntington's trades have been a mixed bag at best.

So I tip toe cautiously in pointing out something bad again... but I can't help it.

Zach Duke was designated for assignment. He's gone. If they get anything in a trade for him, it will essentially be the equivalent of a bag of donuts. 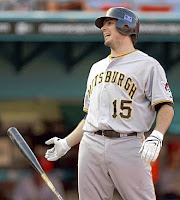 Andy LaRoche is also heading out the door. Now I understand the economy of baseball (and the economy for that matter) and that Huntington had to clear some roster spaces.

But man I couldn't help but think of one trade that was made and one that wasn't... and more missed opportunities to make the Pirates better.

In 2008, Jason Bay was a prime trade chip. The Red Sox thought highly enough of him to make him Manny Ramirez's replacement.

The Dodgers thought highly enough about Ramirez to deal for him and sell lots of tickets and Dreadlock wigs.

And the Pirates got LaRoche... a young right handed third baseman who did exactly nothing in the bigs. They also got Brendan Moss and Craig Hansen, both busts and Bryan Morris who hasn't exactly impressed in AA. 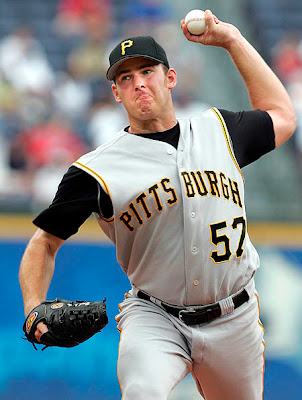 Meanwhile Duke, who looked like a young potential ace in 2005, had his ups and downs. But by 2009 he was eating up innings and pitching to a good ERA. He was a 26 year old left handed pitcher on the All Star team.

If he wasn't going to be a cornerstone for the franchise, I bet he would have been a good trade chip.

Oh yeah. ALL the time.

So instead of dealing him... or making him part of their long term plans... they did neither and will get gotch for him.

This reminds me of Matt Capps, the Pirates reliever who Pittsburgh let walk away at age 25.

The got absolutely nothing for him.
But 1/2 a season later, the Nationals were able to flip him for Wilson Ramos... a catcher who is just about ready for the bigs.

So once again, I shake my head at the praise of Neal Huntington.
He blew the Jason Bay deal.
He botched Matt Capps.
And he wasn't able to turn Zach Duke into anything.

Now I will no doubt get a ton of negative comments for this post and I am expecting it.

And I'll get a lot of revisionist history.
"Bay has been a flop with the Mets!"

Unfortunately like before I have facts on my side.

I want to see the Pirates succeed. And maybe Huntington will build a good team through the draft.

But wouldn't it help if he made a good trade or two?