Would someone else PLEASE bid on Derek Jeter? 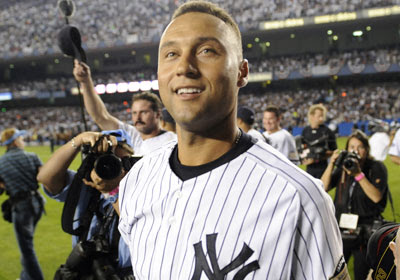 Derek Jeter will be a New York Yankee in 2011.
Everyone on the planet Earth knows that.

I am sure there is a bushman in the Kalahari desert bewildered by a Coke bottle who when asked about Jeter's contract status would reply "Jeter? *Click* He's not going anywhere! *Click*"

And yet both Jeter and management are playing out a bizarre charade as if he could play elsewhere.

One Yankee executive (whose name probably rhymes with "Pank Peinbrenner") asked "Where is he going to go? Cincinnati?"

As if the idea of a player ending his career in a place other than the Bronx is so insane.

And Jeter's agent is "baffled" by the fact that the Yankees are offering a shortstop closer to 40 than to 35 ONLY a three year deal that would keep paying him as one of the elite players in the game.

And all the Jeter defenders are waxing poetic about Jeter's place among legends like DiMaggio and Mantle and shouldn't the Yankees pay him for his leadership qualities and what he has done in the past for the Yankees?

As if he took less money to play for the Yankees when he signed that 10 year, $189 million contract.

As if HE went to third to make room when a superior shortstop came to town.

Wasn't he already well compensated for past services rendered?

So I have a crazy way to settle this nonsense... have Jeter go out on the open market!
See what he is worth! And then have the Yankees match the best offer.

Isn't that the fair thing?

I suggested in a tongue and cheek manner that the Pirates should make a bid for him.

But Vince Caramela at the Hardball Times broke down Jeter's possible destinations.
And Peter Abraham at the Boston Globe speculated about Jeter collecting his 3,000 hit in a Red Sox uniform.

So go out there and find a number.

And Yankees, see what he is worth and consider if you want to ante up.
Even iconic franchise players can part ways with their teams.

In baseball even the likes of Ty Cobb, Hank Greenberg and Christy Mathewson wrapped up their careers elsewhere.

And oh yeah, Babe Ruth finished his career as a Boston Brave.

Perhaps the Yankees might say "Do you know what? We're not going to match the Padres offer."
And in a way, can you blame them?

They signed Jorge Posada to a "let's be loyal to our boys" contract after the 2007 off season. Not one team could possibly have offered him 3 years... the Yankees gave him 4. And he was worthless after 2 seasons.

Maybe they don't want to get in the habit of over compensating for players they have already paid a fortune for.

And if Jeter signed elsewhere, I NEVER want to hear a Yankee fans complain. The Yankees and their fans treat each off season like a Brewster's Millions spending spree with the automatic assumption that each and every star will eventually wear pinstripes.

It wouldn't kill the fan base to see a Yankee legend wear someone else's uniform.

All of this insanity can be solved the good old fashioned American way.
Find out Jeter's worth and decide to pay it or not.

That way there is no question.
Is the Yankee offer an insult? If it beats the market, then obviously it isn't.
Is being a Yankee the most important thing to Jeter? If he resigns for less money, then no doubt.

Of course because I am a Red Sox fan, I will get accused of slighting Derek Jeter. I practically wrote a love letter to Jeter last year. He's obviously a Hall of Famer and a great Yankee.

He is clearly the last Yankee to ever wear #2.

But he HAS been paid for the intangibles. Now? He should play what he is WORTH.

SO come on, other teams... let's set the price and see if the Yankees will blink.