The Tom House 1979 Topps Card is worth a salute 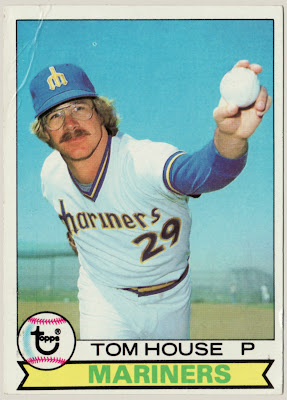 The card is a work of beauty as only Topps could do.

Clearly shot at spring training, he is styling in the Mariners double knit pull over pajama like uniforms.

And you’ve GOT to love the trident hat. I’ve always been a fan of the classic trident logo without the star. I like the current “S” logo, so I am not saying they should go back to the trident. I’m just saying it is a shame that we never saw a post season game with the trident hat.

And the best part of all… he’s not releasing the ball. I know this was a posed, staged shot… but did they have to use the one where he is clearly not going to let go of it? It’s not like he is showing us the logo. It’s a pitching pose… and as forced and awkward as you will ever see.

This bothered me at age seven. “Why isn’t he releasing the ball?” I kept thinking.

Tom House himself had a career that was more fascinating than the numbers on the back of his card would suggest.

He had a few good years as a left handed reliever for the Braves in the mid 1970s, but his big league playing career was over after the 1978 season with the Mariners. In fact the stats on this Topps card are the final tally of his 8 seasons.

He also admitted to experimenting with steroids back in the 1970s, but stopped because his fastball didn’t improve. He’s been one of the most honest people NOT named Jose Canseco on the topic.

House has been an influential coach for many pitchers and was singled out by Nolan Ryan in his Hall of Fame acceptance speech as a great influence.

The “Father of Modern Pitching Mechanics” coaches for USC and has written many book and made several videos about pitching mechanics.

I wonder if he teaches to release the ball in those videos.