I evidently struck a nerve with Met fans 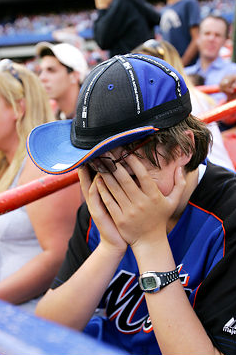 Yesterday I posted a tongue in cheek Sully Baseball entry where I tried to figure out better ways for the Mets to spend $18 million other than paying Luis Castillo and Oliver Perez to play elsewhere.

Yeah it was sarcastic and not 100% serious... and the result (partially thanks to links on Mets Blog and Amazin' Avenue) was I had more visitors in a single day to Sully Baseball than any other day in my existence. WOO HOO!

And by the comments and e mails I received, most of them were Met fans who now hate me.

I must say, Met fans can be kind of sensitive. It could be the fact that they are surrounded by Red Sox, Yankee and Met fans who have all had a World Series title to celebrate since Carlos Beltran saw that called third strike.

It could be the collapses of 2007 and 2008 and the Madoff scandal and the losing teams with an elite payroll have taken away their sense of humor.

Later tonight I will address my favorite comments I received.

Whatever you do, when a team with a top 5 payroll coming off of back to back losing seasons that virtually nobody is picking to have a .500 season is involved in one of the great financial scandals in decades, NEVER insinuate that they are poorly run!