Sorry Met fans... I am writing another post about your team 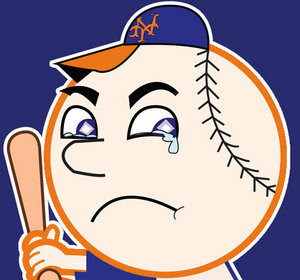 I've not made many Met fan friends recently... partially based on the passing around of my "Better use of $18 million" post. But forgive me, I need to write something else.

I said the Mets are going to lose 90 games.
From the responses by Met fans, you would have thought I said "The Lakers are going to miss the playoffs."

After many comments about my weight, intelligence and sexual orientation, the consensus was that I am an idiot for thinking a team that lost 83 games last year will lose 90 in 2011.

Mainly because some of their players MIGHT come back and some others COULD have comeback years.

Now I have already covered the facts that the Mets improvements are cosmetic and that the Phillies, Braves and Marlins all have better starting staffs... but folks, I saw an article today that made me think "Oh boy... this is going to be a worse year than I thought for the Mets."

Yup. The Mets who play in New York and have a brand spanking new stadium and their own TV network could lose a combined $100 million bucks in two seasons.

Revenues are down and so is attendance.

And with the Madoff scandal hovering over the team (sorry folks, that elephant will be there until the team is sold) the Wilpons are almost certainly be forced to sell the team at one point.

So what do teams do that are on the verge of financial ruin, tangled in national scandal and will be forced to sell?

Do they make improvements to the team?
Do they acquire players to help them win the pennant?
Or do they start chucking bodies overboard?

Guess what?
If Jose Reyes, Carlos Beltran, Johan Santana, Jason Bay, Francisco Rodriguez, Taylor Buchholz, Chris Capuano or D. J. Carrasco are healthy and productive in 2011, they will be shipped off for minor leaguers and smaller price tags.

It's not probable, but we are currently treading in uncharted financial waters.

You can't look at this team like a typical rebuilding process. A New York team should never be in "Tampa Bay mode" and looking to shed its stars because of lack of revenue. But that is what we are looking at with this team.

Any player a Met fan is looking at as hope for improvement will probably be used to relieve debt.

It is not going to be a pretty year, Met fans.
Go to the games. Prove your loyalty.

And in 5 years when Donald Trump owns the team and they are contenders again, you can point to all the bandwagon Met fans and say "Hey! Were YOU at CitiField when they were crumbling under the Madoff scandal?"