A suggestion for MASN and the Hagerstown Suns 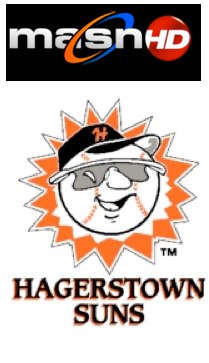 The Washington Nationals announced that they will be sending potential star Bryce Harper to the Class A Hagerstown Suns. And with this turn of events, let me make two big suggestions, first to MASN, the sports cable network that covers the Nats and to Harper's new team in Hagerstown MD.

MASN... forget the Nats and only broadcast Suns games this year.

Seriously, the Nationals aren't going to win much this year. They have an outside shot at .500, but even if the Phillies disappoint, the Braves and the Marlins are also looking good.

So if you are a die hard Nationals fan, you are more interested in the progress of two players: Stephen Strasburg and Bryce Harper. Now watching Strasburg rehab isn't good TV... but watching Harper with the Suns would be.

The Suns are only an hour and a half outside of Washington DC. They can send Bob Carpenter, F. P. Santangelo et al to cover the Suns.

Let's face it, during a Nationals game, it will be much more interesting to see Harper hit a homer than see the Nationals play out the string.

So reverse it! During a Suns game, occasionally break in and say "Let's get an update from the parent club."

Hagerstown Suns... get your souvenir store on line! NOW!
When I saw Harper was heading to Hagerstown, I went to the Suns website to see what souvenirs they had at their on line store.

I wasn't going to buy anything, but I am guessing that Harper's arrival will be the best thing to ever happen to Suns merchandise. Harper will no doubt be the biggest player to ever play as a member of the Suns.

Now of course I know some big time major leaguers played for the Suns at one point or another (including Hall of Famer Jim Palmer) but nobody with the hype and the preseason anticipation as Harper.

So I clicked on it wondering if they already had their Harper replica uniforms ready to sell.
After all, the Nationals weren't going to send the 18 year old Harper to AA Harrisburg. And the GCL team and the Auburn Doubledays don't start until June.

So the only two places where Harper would wind up would be either Hagerstown or Potomac. So they would be prepared for the big day, right?

Here's what was on the Hagerstown Suns official website under "Store" as of this writing.

An e mail address and a phone number.
That's it.

A player getting national attention (pun intended) will be making his grand entrance to pro baseball (Arizonal Fall League doesn't count) with the Suns and the team doesn't have an on line store?

No place for people to click on to buy a hat, a jersey, a t shirt?

This is 2011! And Hagerstown isn't an obscure village off the coast of El Salvador. It is a city that is an and hour and a half from Washington DC and Baltimore and less than 3 hours from Penn State University.

I am going to go out on a limb here and say they may be one person in any of those places who could set up a web page to sell merchandise.

How long will Harper even be a Sun? If he tears up the Sally League then he will be off to Potomac before you can say "Bobble Head Night."

And how many times will the Hagerstown Suns be in the NATIONAL news?
Today and when he makes his debut.

So the Suns have blown 50% of the best chances to sell the most merchandise in the history of the team.

Here's a tip for any member of the Hagerstown Suns reading this.
Stop reading blogs and go find someone to fix your damn website!

I am not an MBA, but I think you just blew a shot to make some serious cash.