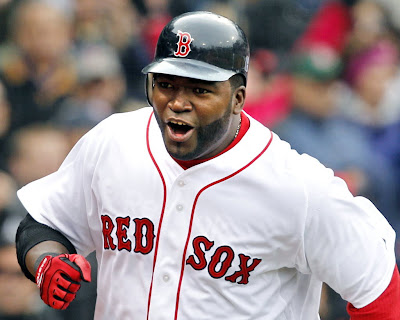 David Ortiz will be the DH for the Boston Red Sox in 2012.
At least there will be THAT stability and reminder of the championship seasons.

And he'll be a member of the Red Sox for at least part of 10 seasons.
It's a nice round number and a lot of great Red Sox players recently never got to 10.

Mo Vaughn lasted 8 seasons in Boston.
Pedro Martinez was with the Red Sox for 7 seasons.
Nomar Garciaparra was traded during his 9th season.
Manny Ramirez was dealt in the middle of his 8th.
Jonathan Papelbon gave the Red Sox 7 seasons.
Derek Lowe pitched all of or part of 8 seasons.

10 is nice.
Nice round number.
And with Varitek and Wakefield not guaranteed to come back, Ortiz could become the longest tenured Red Sox player.

And hey, he's still kind of productive if not all pumped up the way he used to be.

Flaws and all, I will always love Big Papi.
Glad it has been a decade.