People who hate the Yankees and Red Sox should be happy 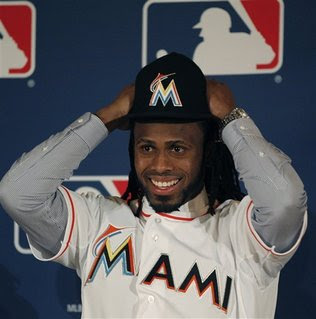 Over the last few off seasons, I've heard lots of bellyaching, complaining and people angry at the Yankees and Red Sox for going on wild free agent shopping sprees.

It wasn't fair.
How can teams compete?
The rest of the league is just the farm system for Boston and New York.
And they buy the World Series every year (forgetting that more often then not, neither the Yankees nor Sox are even IN the World Series.)

Well last year the Phillies put their flag in the ground to make it three teams that buy everyone up.

And THIS year?
Hey big spenders in Anaheim and Miami!

A few years ago nobody wanted to sign with the Angels and the Marlins had a payroll lower than what Jose Reyes will make a year!

And the Nationals seem to want to spend money and the Blue Jays want to make a splash. And don't count out the Rangers (who have as many World Series appearances in the last 7 seasons as the Red Sox and Yankees combined).

And did you notice who seems to be sitting this free agent season out?
The Yankees and Red Sox.

They may bid on a Ryan Madson or an outfielder, but the idea of them buying every player is out the window.

There are other buyers out there.
Maybe there will be a "Miami - Anaheim" bias to replace the Northeastern bias.