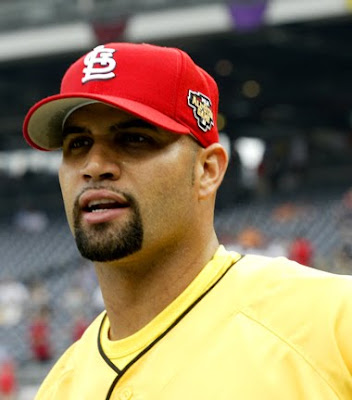 I have felt for the past few weeks that Albert Pujols was bound to go back to St. Louis. It made the most sense for his career and it made sense for the Cardinals to keep him. The stability of Pujols on the team moving on to defend the World Series title and the end the LaRussa era and the beginning of the Mike Matheny years was critical.

And the main suitors were dropping off.

The Dodgers? Nah. They have unstable ownership and already spent big time on Matt Kemp.

The Cubs? Not going to happen. They have too many hole to spend $25 million on a first baseman, no matter how big a star he is.

The Mets? They are a nickle and dime small market team.

The Marlins? I equated their Pujols pursuit with the Herman Cain Presidential bid. It was for publicity. Plus they spent all their money on Mark Buehrle, Jose Reyes and Heath Bell.

Seriously, his return to St. Louis was all but assured.

But now it appears that the Angels want to bring Pujols to Anaheim.

Don't get comfortable Cardinal fans.
This makes a lot of sense for everyone.

Arte Moreno is not beneath spending money and making a splash. Last year's big pick up, Vernon Wells, was a turkey.

But the team has excellent pitching with Jared Weaver and Dan Haren leading the way. And they have some good veterans like Torii Hunter and Howie Kendrick.

They have some excellent young players like Mike Trout, Jordan Walden, Peter Bourjos and Mark Trumbo.

Put Pujols in the middle of this team and suddenly the young players have an MVP to look up to, veterans have a superstar to take pressure off them and pitchers know that some more runs.

And if the Rangers take a step back, then the Angels could be the favorite in the AL West.
And Mike Scioscia is a Hall of Fame caliber manager.

And Southern California is a nice place to live. Both Los Angeles AND Anaheim.

So be a little nervous, Cardinals fans.
Pujols has been your team's angel... but he COULD be an Angel.

I still think he will be a Cardinal, but the Angels actually make sense.