A-Rod runs to Germany to hide from Father Time 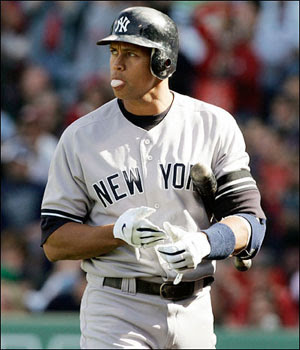 I have no clue what Kobe Bryant suggested to Alex Rodriguez. I hope it wasn't marital advice. But the two least favorite players for Boston Sports Fans met and evidently talked about going to Germany to get some sort of blood work done that sounds strange at best and fishy at worst.

Is it legal?
Probably.

It is a red flag that he can't find someone in America to do it?
Yeah. Sort of.

But there are two things that A-Rod can't prevent no matter how many procedures he has had and how many timezones he crosses:

Age and a lack of steroids.

He's on the wrong side of 35.
Back before the days of Performance Enhancing Drugs, that was right around the time that sluggers fell apart.

Jimmie Foxx was washed up by 35.
Frank Robinson was on the decline by then.
Dave Winfield had one more great season after 35, then fought constant injuries.
Eddie Murray was still effective, but his best years were well behind him.
Al Kaline was on his last legs.
Jim Rice was winding down.
Hank Greenberg had his last great season at age 35. He was out of baseball at 37.
Willie Mays never hit 30 homers after age 35 and was never again an MVP candidate.

Hank Aaron and Babe Ruth continued to put up amazing numbers after 35.
They were both pretty good.
And they were the exceptions.

A-Rod is no longer juicing. According to A-Rod his juicing days ended when he left Texas. He took them in Texas because of the pressure. And then he stopped (because Heaven knows there is no pressure in playing in New York.)

He was caught in 2009 and turned his year around by leading the Yankees to the World Championship... an act that bought A-Rod about 3 minutes of good will from Yankees fans. Since winning the MVP (his 3rd) in 2007, his OPS has dropped every season, his home run totals have dropped almost every year (he hit 30 in both 2009 and 2010) and he hasn't been able to avoid injuries.

A drop in power and inability to recover suddenly happening in the past few years, ESPECIALLY after the positive test was revealed? Are you SURE you stopped when your days in Texas ended?

He'll be 41 years old in 2017.
His body is breaking down to the point where he is doing experimental blood work in Germany to get him in playing shape at age 36!

How is this going to get BETTER over the next six years?
Yeah the Yankees have tons of money, but enough to pay a player in 6 years like a superstar even though those years seem behind him NOW?