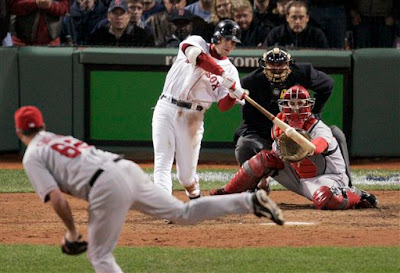 The Red Sox traded Jed Lowrie and Kyle Weiland to the Astros for reliever Mark Melancon.

It's a smart trade. The Red Sox need to rebuild their bullpen and Jed Lowrie is not a long term answer for the infield. Melancon is talented, piled up saves for an awful Astros team and has a good ERA+. And he's only 26 years old.

But before we bid good bye to Jed Lowrie, let's salute him.
He was part of that 2005 First Round crop that supposedly was going to replenish the Red Sox.

Jacoby Ellsbury has held up his end of the bargain.
When healthy Clay Buchholz has been a stud.
Craig Hansen was supposed to be a the next bullpen ace. It didn't work out that way.
And Jed Lowrie was going to provide depth SOMEWHERE in the infield.

The Sox got the Lowrie pick as a result of losing Orlando Cabrera to the Angels.

And it was against the Angels that he had his greatest moment.

In 2008 Division Series, the Red Sox were the defending World Champions but the Angels were the best team in the American League. If any team looked like they were in a position to unseat the World Champs, it was this Angels team. But the Sox took the first two games in Anaheim and then lost an extra inning thriller in Game 3.

Game 4 was a back and forth affair with the Angels tying the game in the 8th. In the 9th, Jason Bay dropped a bloop double in front of Reggie Willits. With 1 out, Mark Kotsay hit a linedrive that looked like it was going to clinch the series but Mark Teixeira made a diving catch at first base.

Up stepped Jed Lowrie who swung at Scot Shields' first pitch and smacked it into right field. Bay came around to score and the Red Sox were off to the ALCS.

It was the 16th post season series won by the Red Sox.
(7 World Series, 4 ALCS and 5 Division Series).

And as of this writing, it was the last playoff series won by Boston.

We all jumped up and celebrated that night.

So before you head off to Houston, let's salute Jed Lowrie and say thank you.

And hopefully the number of Red Sox who ended a post season series with a walk off hit will increase before long.