Shame on any Cardinal fan dumping on Albert Pujols 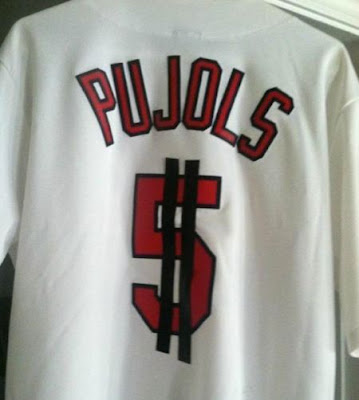 Hey Cardinal fans.
Tell me that these are just a few bone headed isolated incidents.
Please tell me that nitwits like this guy don't speak for you.
Show some dignity and have yourself heard over these idiots.

I respect the hell out of St. Louis fans so tell me that you are making fun of this person.
I shouldn't be calling them the Cardinals.
They are THE DEFENDING WORLD CHAMPION ST. LOUIS CARDINALS.
So tell me that you remember that...
That you remember Pujols getting 3 homers in Game 3 and getting the double that started the game tying rally in Game 6.
In fact I am not going to insult Pujols by listing his amazing resume.
He's Albert F*cking Pujols!
He just gave the Cardinals 11 brilliant seasons.
And guess what? The Angels will be paying for his twilight years.
Pujols didn't owe St. Louis fans a damn thing.
People comparing this to LeBron?
Did I forget LeBron's two championships in Cleveland?
Did I forget LeBron leaving it all on the floor the way that Pujols played his guts out for the Cardinals?
For more than a decade Cardinal fans had the privilege of watching the most exciting player of this generation in his prime... no positive tests... no scandal... multiple championships... What more did you want?
Should Reds fans have burned Pete Rose's jersey when he went to the Phillies?
Your reputation as classy fans are second to none, Cardinal Nation.
Don't spoil it by acting like spoiled petulant kids.