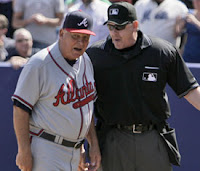 I'm not a Bobby Cox fan... in fact I have never rooted for the Braves during their 14 straight division title streak.

But the guy belongs in the Hall of Fame and he is undeniably a great manager.

His critics say "He only won one World Series!"
That's true. That's all Leo Durocher won. That's all Earl Weaver won. Didn't seem to tarnish their legacy... but somehow it is hanging over Cox.

Well if he had one more World Series title, I'm sure there'd be no debate.
And over the years he's had some gut wrenching innings that no doubt made Cox and pitching coach Leo Mazzone rock back and forth faster than usual.

And because this is Sullybaseball, I feel compelled to list them.

Cox's Toronto Blue Jays ran up a 3 game to 1 series lead on the Kansas City Royals, but lost the last three games. In the bottom of te 6th in game 6 with the Jays trailing by two, Royals pitcher Bud Black uncorked a wild pitched that sent the tying runs to second and third with George Bell up and only one out. Black got Bell and Ernie Whitt to pop up. The Jays would not score again and would never have the lead in game 7 as the Royals won and went on to win the World Series.

Jack Morris and John Smoltz matched zeros into the 8th inning in one of the greatest game 7's of all time. Lonnie Smith led off the 8th with a single and Terry Pendleton launched a double that appeared to break the scoreless deadlock. But Smith, a veteran of 3 World Series winners, was fooled by a decoy play by Chuck Knoblauch and Greg Gagne and stopped at second briefly before going to third. The Braves had runners on second and third with nobody out... but couldn't score. The Twins would win the game, and the World Series, 1-0 in 10 innings.

The Braves beat their nemesis Jack Morris in game one of the World Series and seemed to have the Blue Jays on the ropes with a 4-3 lead and 1 out with nobody on in the 9th. Newly acquired closer Jeff Reardon walked Derek Bell and then let up a stunning 2 run homer to part time player Ed Sprague. The Blue Jays would win the game and took control of the series in Toronto, winning in 6 games.

The Atlanta Braves had a team batting average 50 points higher and a team ERA more than a run and a half lower than the Philadephia Phillies in the 1993 NLCS. Yet they lost the series in 6 games. When the Braves won it was a blowout. When the Phillies won it was a nailbiter. In game 4, with the Braves trying to take a commanding 3-1 lead, the Braves got 10 hits off of Danny Jackson and Mitch Williams, but only scored 1 run. In the 9th, the Braves got the tying and winning runs on base with nobody out... but Jeff Blauser couldn't get a sacrifice bunt down and Ronnie Gant hit into a game ending double play. The Phillies would win the next two games and the pennant.

The minute the late Eric Gregg stepped onto the field at Joe Robbie Stadium to be the homeplate umpire, the Braves were doomed. Any pitch that came within 10 feet of the strikezone was called a strike and Livan Hernandez threw a complete game 3 hitter with 15 Gregg aided strikouts. Kevin Brown would throw a complete game in game 6 to clinch the pennant for the eventual World Champion Marlins.

In a wild game one, the Braves tied the game off of Trevor Hoffman in the 9th inning sending it to the 10th. But Ken Caminiti would homer off of Kerry Lightenberg and give the San Diego Padres the win. The energized Padres would go up 3-0 before winning the series in 6 games.

After dropping the first two games at home, the Braves came back with a purpose and led the Yankees 5-1 after 4 with Tom Glavine on the mound. The Yankees chipped away making it 5-3, but Cox left Glavine in to start the 8th. Joe Girardi singled and Chuck Knoblauch, who had burned the Braves with the decoy play in 1991, did it again this time with a 2 run game tying homer that sent Yankee Stadium into delirium. Chad Curtis would win the game on a lead off 10th inning homer and the Yankees would complete the World Series sweep the next night.

When the Rick Ankiel story was a feel good story (remember that?) people kept pointing to his disastrous game 1 in the playoffs against Atlanta where he threw 5 wild pitches and had to leave in the 3rd. What people didn't mention was the Cardinals WON that game. Greg Maddux was a disaster, letting up hits to the first 4 batters and coupled with a pair of errors, the Cardinals took a 6-0 lead... a lead so big not even Ankiel could blow it. The underdog Cardinals took off, sweeping the series in 3.

Even though Randy Johnson was mired in a 7 post season game losing streak, the Braves can't seemed to get a rally started against him. In the 9th, they manage to get the tying runs on base and manager Bob Brenly decided to not go to the bullpen. Johnson got Brian Jordan to strikeout swinging to end the game. Johnson would win the game 5 clincher and 3 games in the World Series against the Yankees.

The heavily favored Braves trailed the Giants in the deciding 5th game 3-1 in the 9th. But Furcal and Franco both reached. The winning run came to the plate in the form of Gary Sheffield (with Chipper Jones on deck) and nobody out. Sheffield struck out and Jones hit into a strange double play that clinched the series for the Giants.

The 2003 Braves won 101 games. The 2003 Cubs won only 88 and were huge underdogs. The Braves took a 1-0 lead into the 6th of game 1, but the Cubs came storming back. The big blow came on a 2 run double by the pitcher Kerry Wood. The Cubs would win the game and ultimately the series in 5 games.

In an underrated playoff series, the Astros and Braves exchanged wins and sent the series back to Atlanta for a do or die game 5. It seemed like another thriller with the Astros up 3-2 going into the 6th, but Houston added a run in the 6th... then in the 7th blew the game open with a 5 run seventh highlighted by a 2 run shot by Jeff Bagwell. Houston would add 3 more in the 8th and clinch the series with a 12-3 blowout.

Atlanta would play Houston in the Division Series for the 5th time and with a 6-1 lead in the 8th inning of game 4, seemed poised to send it back to Atlanta for another do or die game 5. But Kyle Farnsworth would let up an opposite field grand slam to Lance Berkman to make it a one run game. He would allow a 2 out game tying homer to Brad Ausmus in the bottom of the 9th to send it to extra innings.

They essentially played that 5th game as they went an additional 9 innings.
The Braves had runners in scoring position in the 10th, 11th, 12th, 14th and 17th but could never get any of them in. Role player Chris Burke would homer in the 18th inning to end the series.


How many of those innings were Bobby Cox's fault?
Were any of them?

If any of those innings went the other way, would Bobby Cox be a better manager?
Or were those other managers lucky?

Either way, if one of those years did go Bobby's way, there would be no doubt he belongs in Cooperstown.

Man... how DID Lonnie Smith fall for that decoy play?