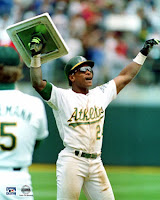 I wish everyone a Happy December 25…

I tend to say “Merry Christmas” but some people find that offensive.

I could say “Happy Holidays” but then a whole other group will find THAT offensive.

I have little patience for anyone who would take offense to EITHER greeting, but at Sully Baseball we look to find peace and harmony.

So let’s all agree that on December 25 it is OK to say “Happy Rickey Henderson’s Birthday!”

Rickey was pretty awesome, will probably be elected to the Hall of Fame in a few weeks and with how he was kicked around at the end of his career, chances are he played a game or two for YOUR team.

So to all of my readers and friends out there in the strange internet world, let me say “Happy Rickey Henderson’s Birthday.”

And may you, like Rickey, become the Greatest… of all time!