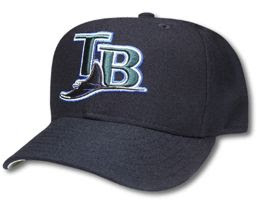 I start my vow to write something about every team in the majors by getting the Devil rays out of the way.

The Tampa Bay Devil Rays, a team named appropriately enough after a bottom feeding fish, are starting their 10th season.

And so far the only thing uglier than their inaugural uniforms has been their record.

But they've been around for nearly a decade, and their fellow expansion team from 1998, the Arizona Diamondbacks, have experienced 3 trips to the playoffs and a heart stopping World Series title.

So that's more than enough time to come up with 10 great moments!
In honor of my on line friends Pat and Christin, the two biggest Devil Rays fans in the world, Sully Baseball presents... 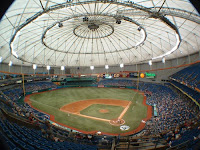 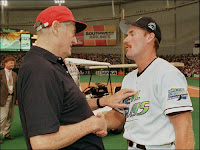 2. March 31, 1998. The Devil Rays first game. Hall of Famers Ted Williams, Stan Musial, Al Lopez and Monte Irvin are in attendance. After the Rays lose 11-6, the front office attempts to add Williams, Musial, Lopez and Irvin to the 25 man roster. 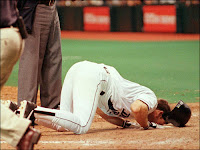 4. August 7, 1999. Wade Boggs, probably the only Devil Ray you have ever heard of, homers for his 3,000th hit. His celebration makes V-J Day look muted. The Rays were losing when he hit the homer. They were still losing after they hit the homer. They lost the game 15-10.


Jim Morris' story is turned into The Rookie, one of the best baseball movies ever made and the only one to turn a mop up

appearance in September into a tear jerking sequence. Morris should be very happy they got the impossibly handsome Dennis Quaid to play him in the movie.

Lou clearly wanted to go the Mets and burnt his bridges in Seattle, so he used the Rays as a bargaining chip. When the Mets brought in Art Howe, Lou claimed he wanted to spend more time with his family in Tampa. He clearly knew he had his Octobers free.

7. March 31, 2003. Carl Crawford hits a 3 run home run off Red Sox reliever Chad Fox with 2 outs in the bottom of the 9th to win the season opener for Pinella. The sight of the bullpen blowing a brilliantly pitched game by Pedro Martinez contributes to Grady Little's decision to let Pedro pitch in game 7 against the Yankees until his arm fell off. 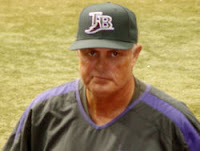 10. July 30, 2004. The Mets make a trade for pitcher Victor Zambrano, clearly thinking he was the Cubs ace Carlos Zambrano. In the process they give up prized left handed pitching stud Scott Kazmir. WFAN's phone lines melt from all of the callers hating the trade and it remains probably the best trade in Devil Rays history. 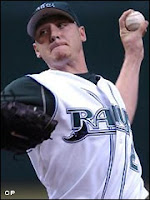 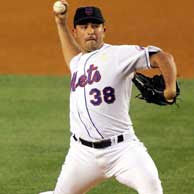 So there you have it.
10 memorable moments.

Most of them taking place in March and April... the only one to take place after Labor Day was when a high school teacher got to pitch.

For Pat and Christin's sake, let's hope the next nine years give them something to cheer about other than watching Dennis Quaid.
Posted by Sully at 2:24 PM