I know the rest of the baseball world is tired of us Red Sox fans bringing up 2004.
But you all kept bringing up 1918! It serves you right!

Remember when the bizarre logic leading up the World Series that so many sports writers (and Yankee fans) kept bringing up? Red Sox fans don't want to win it! The love suffering. What will their identity be?

Well the short term effect of winning that World Series was awesome...
And so far the long term has been as well.

Let's stop and savor that sentence shall we?

So as a Red Sox fan, I am feeling confident that my team has a better pitching staff... a better bullpen... a comfortable lead... and a bit of swagger.

It's an odd feeling to have.
Before 2004, in this situation there would be panic.
"My god, how are we going to blow it THIS TIME!"
"The Yankees ALWAYS do it! We're going to choke!"
"They've been doing this to us for generations!"
"Quick! Let's dive into that lake and find a piano!"

All that based on the Red Sox always choking and the Yankees being in capable of choking to the Red Sox. 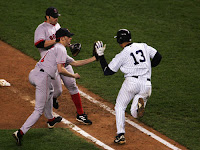 Well all of that worrying was slapped out of Arroyo's glove.

Now I can watch the series like a, GASP, rational baseball fan.

Hope they can win 2 of 3, keep their 10 game lead and continue beating good teams like Detroit and Atlanta.

And know that the Yankees are one injury away from calling ME to start a game, Mariano Rivera continues to stink it up (don't worry... it's only April), Kyle Farnsworth is mouthing off about Clemens... A-Rod is looking at townhouses in Anaheim... Torre and Cashman are checking Craigslist for jobs and Jason Giambi keeps giving vague apologies.

I'm sure Clemens will turn the ship around.

Finally we're no longer the panicking fan base.

Too bad we lost that identity of ours.
Posted by Sully at 9:55 AM