Who are you and what have you done with Julian Tavarez?

Who is this person in Julian Tavarez's body?
He was supposed to be a lousy #5 starter, biding time until Jon Lester came back from cancer. 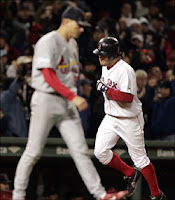 He was the guy who broke his hand punching a phone during the '04 playoffs for the Cardinals and came back in time to cough up a game winning homer to Mark Bellhorn in the World Series.

He was the guy sports reporters laughed at when he said the Sox didn't need Roger Clemens.

And I grant you, his stats aren't exactly screaming Cy Young.

But have you noticed he's pitched well in 4 of his last 5 games?
And those 5 games include 2 wins against the Yankees!

What I am saying is, whatever extra terrestrial has entered

I like you better than the other Tavarez. Stick around awhile.

I am all for body possession if it means a pennant.

I know this clip has been going around, but it needs be seen by every nitwit Red Sox fan who wants to see Manny Ramirez off of the team.

What other superstar in sports is this hilarious?
Seriously!

Name the superstar who is this funny.
You can't can you?