Continuing my vow to write something about all 30 teams... today I take on the Baltimore Orioles.

What the heck happened to the Orioles?
Growing up, they were one of the best teams in baseball year in and year out.
They could hit, they could field and man could they pitch.

That's 24 out of 26 seasons with a winner.
And 8 post season trips... before there was a wild card and a three round playoff.
6 trips to the World Series and 3 Titles.

And now... they are on their 10th straight season of irrelevant sub .500 ball. 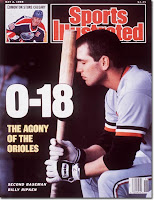 Is it the inconsistent ownership of Peter Angelos?
Is it the lack of a productive farm system or dreadful trades or free agent signings that backfired?
Should they never have moved out of Memorial Stadium into Camden Yards?

I say the downfall started in 1988 when the
team had their worst season in Baltimore (54-107) and they changed their hats. 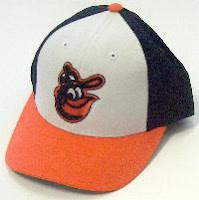 They used to have the smiling, mocking Oriole on the cap.
And what did they change it to? A dull sideways orinthologically correct bird.

Where's the swagger in that? Where is the "We're so better that we're laughing at you" cockiness?
The bird isn't even looking at you!

The 1989 Orioles in the dull caps turned the season around and contended until the last weekend.. but it was an abberation.
In the 18 seasons with the lifeless caps, the Orioles have had only 6 winning seasons and only two playoff trips.

And the team, once one of the crown jewels of baseball, has turned into the place that agents tell their aging clients "Hey, I bet we trick them into one more big contract!"

Bring back the smiling bird!

There was nothing cooler in baseball than seeing Jim Palmer

, Mike Flanagan or Steve Stone mowing down batters with that Oriole grinning back at you.

Or scowling Eddie Murray staring down a pitcher with the 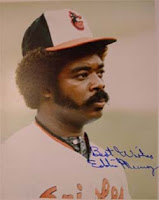 bird almost mocking him. "Yup, my pal Eddie is going to take you deep!"

Brooks Robinson makes a great catch, and the bird loved it.
Earl Weaver argues with an up and that bird is almost shaking his head. "Your call was laughable!"


What does the sideways bird give us? 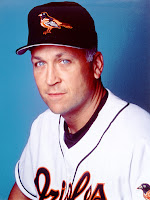 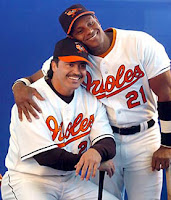 When Cal Ripken broke the record... he wasn't even watching.
When Rafael Palmeiro and Sammy Sosa did 'roids... he literally
looked away.

Who cares if he is orinthologically correct?
We're baseball fans! We don't need accuracy!
We spell "Socks" S-O-X!

Let the bird smile and maybe Baltimore will have something to smile about again
Posted by Sully at 10:32 AM