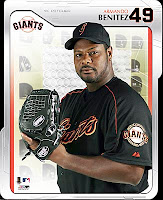 So Armando Benitez came into a tie game in the 9th against the Rockies last night, let up 3 hits, 2 stolen bases and an intentional walk... the Rockies score twice and win the game.

Benitez responded as he did last year after a trademark Benitez meltdown in Washington.
He said "I did my job."

After years of high profile failures which we have covered before, I wondered how he could be so casual about it.

Then it hit me.
Has anyone actually read his contract?
Perhaps in every contract he signed since being with the Orioles, through his times with the Mets and now the Giants, his job has been clearly defined as fulfilling 9 simple goals.

1. If the game is tied in the 9th inning or extra innings, give up the go ahead run.
2. If the team has the lead in the 9th inning or extra innings, give up that lead with lightning speed.
3. When you blow a game, make sure it demoralizes the team after a scrappy come back that your ineptitude makes for naught.
4. Try to let up home runs to light hitting players.
5. Get your fan base to hate the very sight of you to the point that the moment you take your warm up jacket off in the bullpen, you get booed.
6. Become an endless focus on call in talk shows where the team's sanity is questioned for keeping you.
7. Demoralize not only a team but a loyal fan base who can trace the end of their team's pennant chances with your spectacular failures.
8. Despite your failures, insist that you are one of the elites in the game and take no responsibility.
9. Try to gain some weight.

If that is his job description, then I take back my criticism.
He did indeed do his job... and he did it quite well if I may add.
Posted by Sully at 10:49 AM