'Roids is bigger than Bonds... even Bonds on 'roids 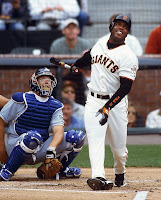 By the mid 1990s, he'd already put together a Hall of Fame worthy resume, including individual awards (including the MVP of his league) and many seasons where he was unquestionably the best in his league. But in his mid 30s, other players were passing him by.

Suddenly, his career exploded again. At a time when most players decline, his numbers IMPROVED. He started winning post season awards at a faster clip than he had before. Kept winning them into the 2000s. His power numbers shot through the roof, he started reaching career numbers reserved only for the elite and passing milestones that seemed unreachable 10 years prior.

He is called a selfish player by many, demanding special rules and getting white glove treatment from his team.

He also has an unquestionable workout method that is the awe of other players.

But there is also a dark cloud. Maybe that surge in his stats when others decline wasn't all clean.

His body changed from being a lean player when he broke into the bigs in the mid 1980s to bulging up comically in the 2000s.

And while he has never tested positive for anything, his name has come up in one of the high profile performance enhancing drug scandals... and no libel suit has been filed.

Meanwhile he is using 2007 to keep climbing up the record book as he is second only to one of the legends of the game in a famous record.

Who was I just talking about?

Was I referring to Barry 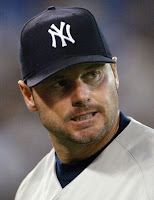 Bonds?
Was I referring to Roger Clemens?

That same story can be used for both players.
Yet Bonds is the one everyone is focusing on.

People say they should wipe out Barry's home runs.
I say every time he hit one off of a juiced up pitcher he should get credit for 2!

And forget Barry's 745 homers.
I want those 2 homers Jason Giambi hit off of Pedro Martinez in game 7 of the 2003 ALCS back! Can we wipe those out? Can I declare the Red Sox the 2003 AL Champions?

If you really care about performance enhancing drugs, test for them all (including HGH) and accept that prior to the latest amendment to the collective bargaining agreement that lots of players on EVERY team used them.

And if you just want to focus on Barry, just admit... you don't like him and that's all what this is about.

And yes, Bud Selig should be there to see Barry break the record. And if he doesn't come voluntarily, he should be strapped in and forced to watch it

like Alex in A Clockwork Orange.
Posted by Sully at 10:13 AM