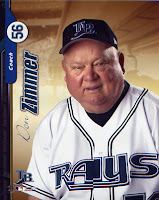 So Don Zimmer thinks it is too early to declare the Red Sox AL East champs but the other teams need to step up quick.

Gee Zim! Great insight!
Let me get this straight so I can keep up with your baseball genius...

It's still May... and the season ends in October... so yeah! It's kind of early. Nice pick up there.

But you think it would be tough to catch the Sox? Really! I guess an 11 1/2 game lead IS kind of tough!

Wow. I can see why people turn to you for your supreme baseball wisdom!

How about some more questions?
Let's say you are managing a team with lots of talented players on it... and you don't get along with some of them. What should you do?

Give those players away? Including a future Hall of Fame pitcher, a beloved All Star and Yankee Killer, a solid reliever and top pinch hitter?

Let's just say you have a future Hall of Fame catcher on that team with injury issues... how do you handle him?
Catch him 154 times until he breaks down? Interesting choice.

Let's say you have a third baseman whose elbow is falling apart, can't throw the ball and is costing your team games down the stretch? You'd keep him in? Nobody knows baseball like ZIM!

OK... final question... let's say you are facing, oh I don't know, your chief rival in a critical series.

You lose the first 3 games badly.
You need a win desperately.
You have three choices to start the game.

Wow. Can I read such

wisdom in your TWO BOOKS?

I wonder if they have Cliffs Notes for his books.
Posted by Sully at 9:54 AM