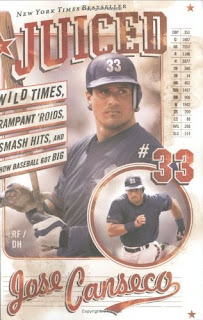 Remember when Canseco's book came out and everyone made fun of him? Said he was full of it and just trying to make a cheap buck by claiming McGwire, Giambi, Palmeiro and others were all 'roided up.

Then remember when all those players were hauled into Congress (because clearly there was nothing better for them to be looking into) and they all scoffed at Canseco's allegations by saying "consider the source"? (except Sammy Sosa who miraculously forgot how to speak English).

That source is looking a lot better these days, isn't it? Canseco is truly becoming

the Herb Stemple of the steroid scandal.
A lot of things stink about the 'roid era. The fun being taken out of the pursuit of the home run title and watching Bud Selig show why he has always been a disingenuous stooge both stink.

So does looking at the stats of the era and speculating who was on it or not. (Hmmm, Kevin Millar's numbers certainly spiked and then fell off fast when testing came in. Hmmm, Luis Gonzalez sure became a big home run hitter in a hurry!)

But one this is beyond speculating: If you played with Canseco, you had a good chance of being an MVP.

Almost everywhere he went, power numbers would spike and one of his team mates would make a run at the MVP. His teammates Mark McGwire (1986-1992, 1997) and Jason Giambi (1997) are well documented. McGwire of course won't talk about the past and Giambi is sorry... just can't say why.

And his buddy from Miami Rafael Palmeiro waved that finger at congress. Now that we know he was doing something, take a look at the back of his baseball card.

He went from being a line drive doubles hitter to being one of the top home run hitters in the AL starting in 1993... Canseco's first full season as his teammate in Texas.

He was also teammates with future 2 time MVP Juan Gonzalez, another huge (literally) slugger who brokedown rather quickly.

Another teammate? Future MVP Pudge Rodriguez. (Anyone notice how skinny he got after testing started?)

Also he played with two pitchers, Kevin Brown and Kenny Rogers, who kept pitching into their 40s and had anger issues. ('Roid rage?)

On to Boston, and suddenly one of my all time favorite Red Sox hitters, Mo Vaughn saw his home run totals jump up by 10 to 15 a year and HE became an MVP. And suddenly broke down.

And it wasn't just the sluggers. Canseco and Clemens were teammates, don't forget. And Clemens was slowing down and was declared by Duquette to be done. And Roger, one of the most competitive people on the planet Earth, suddenly found his fastball again and rattled off 4 more Cy Young Awards. Ever notice how much bigger he got after leaving the Sox?

Back to Oakland in 1997 where future MVPs Giambi and Tejada shared a locker room with him.

Over to Toronto in 1998 where coincidentally Carlos DelGado and Shawn Green saw their home run numbers soar.

He also played with the real guy that Dennis Quaid was playing in The Rookie.

I think it is safe to say he was safe from suspicion.

Over to the Yankees in 2000 almost at the same time as Glenallen Hill... who went on the biggest home run tear of his career.

Finally he wrapped up with the White Sox where Paul Konerko, Ray Durham and Jose Valentin all set their career highs for home runs.

So either Jose Canseco was a fantastic good luck charm for a lot of players or considering him as a source might not be that dumb a thing to do.

I'm not saying all of those players were juiced... but one of the sad things about the 'roids era is you can't honestly be certain that they WEREN'T.

And it also shows the people who want to blame

Barry Bonds for the steroid era the way Dustin Hoffman blamed the monkey in Outbreak for the virus are being too narrow minded.

We'll never know the number of pitchers nor sluggers who used them.
And it stinks that we will treat players guilty even without a test.
I am only certain of 2 things:

1. Canseco is turning into a pretty GOOD source on this subject

and
2. Dennis Quaid should have received an Oscar nomination for The Rookie.
Posted by Sully at 11:52 PM