Clemens... it's going to get interesting 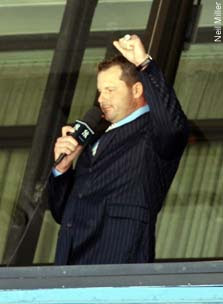 First of all, let me just say this:

The way the Yankees introduced Clemens was awesome.
Seriously, I want more teams to do this.

They have resigned one of the great marquee players of the last 20 years and instead of announcing it via a press release and one of those embarrassingly awkward press conferences where they put the uniform over a suit... they did it with showmanship.

They waited for a packed house and the 7th inning stretch to have Roger to pull his "Howdy Parter" routine to the cheers of the fans. It was so cool that Mike Mussina almost smiled.

Suzyn (sic) Waldman screamed in the press box "Roger Clemens is a Yankee!" in a way that made Al Michael's "Do You Believe In Miracles!" seem subdued.

Next time the Red Sox make a big move, I want them to be parachuted into Fenway Park. Or maybe be hiding in the Wally Costume.

But they had to do it. They needed a pitcher they can rely on and while he costs the Yankees an obscene amount of money, how is it more obscene than Carl Pavano making $8 mil a year and so far averaging a game a season?

And they don't need to worry he will implode in New York a la Randy Johnson and it won't cost them any prospects.

Plus as I mentioned in my "second act Yankees" post, the Yankees LOVE bringing back players who have won before (of course forgetting that they are older as well.)

- The Yankees get a savior every year, one whose acquisition is supposed to be the one that automatically clinches the World Series and makes it un fair for baseball... until said savior is watching from the dugout as another team celebrates. (see also Mussina, Giambi, Matsui, A-Rod, Brown, Vasquez, Sheffield, Big Unit and Damon)

Usually they make this move in December. This year they waited for May


- I love that some people are poo pooing the deal saying "He's just a 6 inning pitcher now."

Have you seen the Yankees pitching staff this year? Half the time Torre has been PRAYING for a 6 inning pitcher. They went through April where the starters were averaging less than FIVE innings. The Yankees have played 29 games and somehow they've already used 30 starting pitchers. You can look it up!

Plus having Roger gives the team a psychological boost. At least the teammates can recognize who he is! Look at tonight. The Yanks are starting someone named Matt DeSalvo. Ever heard of him? Me neither. Yahoo Sports doesn't even have a picture of him, unless his face is a Yankees logo.

Clemens will take Kei Igawa's spot in the rotation. Igawa's recipe for success is NOT knowing he is going to pitch on a certain day... but in order to do that, the Yankees have to keep breaking the legs of their young starters and throwing Igawa into games. 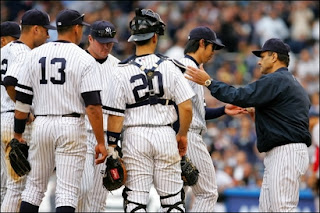 An overpaid guy who is clearly not wired correctly to play in New York?
Kei Igawa is Japanese for Carl Pavano.

- Jeter and Giambi evidently were constantly e mailing Clemens. I wonder if they use emoticons or say LOL. I have a friend who is a man's man, former captain of the football team, hunter, NRA member, life long Republican. He writes me e mails and occasionally signs off on an e mail with a little ":-)"

So it is possible Jeter could have written an e mail that would say "Gr8 if U came Back. ;-)" Or Giambi could have said "Karsten is as good as you. LOL"

- Us Red Sox fans will try to brush this move aside, but it is huge. Clemens has a tendency to make the pitchers around him a little better through his... a hem... big work outs.

And his presence will probably loosen up an undoubtedly tense Yankee clubhouse.
Plus Wang, Clemens, Pettite and Mussina is a darn good starting 4, especially if you remember their main job is to keep the opposition from scoring more than 5 runs.

And Torre will probably relax and stop pitching like his job is on the line.

And remember, this is not a move that was made for the long term benefit of the Yankees. This is a response to the "Sky is Falling" Yankee fans who were bracing themselves for their first irrelevant summer since 1992!

Scared we can't pitch? After losing a game 15-11, I'd be scared too! HAVE NO FEAR! CLEMENS IS HERE! And he rides in on his white horse, saving Joe's job... saving the summer... bringing the Yankees back to the promise land... and filling up the joint every 5th night.

And while EVERYTHING is going the Red Sox way and NOTHING has gone the Yankees way... 5 1/2 games is nothing to make up. I picked the Yankees to win the division before Clemens and they just might pull it off.

- And also let's stop with the whole "Roger is greedy" angle.
OF COURSE he's greedy! Everyone is a little greedy. And if I were in a position to milk out $19 million for 3/4 of a season, I'd do it too and so would you.

- HOWEVER let's not start booking the parade just yet.

With Roger pitching 6 innings a start, that means the usual suspects of Vizcaino, Bruney, Myers, Bean and Proctor are still pitching almost every day. Roger may like the run support he'll get in the Bronx but I am guessing he won't be thrilled to see the middle relief cough up leads.

Roger isn't pitching for the Yankees until June. (Coincidentally for a Red Sox series... chances are it won't get much publicity.) That means the Yankees will play another month with a pitching staff that has more holes in it than the plot to Spider Man 3.

And they are already 5 games back in the loss column. If the Red Sox could add a few more games to the lead, with their pitching staff the built the way it is... would it be too big a lead?

- Finally the Yankees have pushed all their chips into the middle of the table. They tried Younger and Cheaper, they tried We've got our own Japanese guy, they tried This Hughes kid might be the next Clemens. All that resulted was panic, finger pointing, some trainer got fired and somehow A-Rod became the most love Yankee since DiMaggio.

They had only one card left to play and that was Clemens saving the season.
And Clemens said what every Yankee thinks but virtually none will admit... Not winning a World Series is a failure in Yankee-ville.

Pressure is on.
Red Sox vs. Yankees just got a little better.

It's going to get interesting
Posted by Sully at 12:28 PM