At the beginning of the 2007 season, I ran down the current major players and gave my thoughts on their Hall of Fame candidacy.

It got me a little attention and now on the verge of another vote, I decided to revisit the topic.

Everyone has their own criteria for who they think belongs in and I'm no different.

Things I look for:
- Being an elite All Star caliber player for 10 or more years.
- Having stats that tower above the league average.
- Contributing to winning clubs helps.
- Individual awards like the MVP or Cy Young help.
- Big October performances help (but it won't keep A-Rod out.)

Things I don't care about:
- Longevity. (Mike Morgan played for 22 years... should we put him in?)
- Whether or not he has a ring. (Eric Gagne has a ring. He should give it back.)
- Where they played. (You'll be surprised which Red Sox players I am keeping out of the Hall and which Yankees I want in.)


Also I have a special rule about closers.
YOU MUST HAVE BEEN THE BULLPEN CLOSER FOR A WORLD SERIES WINNER.

That's not my only closer requirement for the Hall (relax Adam Wainwright) but it will put a supposed Hall of Fame closer on the outside looking in with Sully.

As for the other elephant in the room, I can't look into a crystal ball and tell you which players were on steroids.
But if a players main argument for the Hall is a huge spike in their numbers in the late 90s and early 2000s, chances are you aren't getting my vote.

And because it was such a hitters era, I am being easier on pitchers than on hitters.

OK, enough yapping.
Let's put some people in the Hall of Fame!
(The players are listed in no particular order)

HALL OF FAMERS IF THEIR CAREERS ENDED RIGHT NOW (AND FOR SOME OF THEM IT HAS!)

1. GREG MADDUX - Not the most exciting pitcher, but arguably the best pitcher of his generation.

2. MIKE MUSSINA - The 20 win season to end the career clinched it.

7. MANNY RAMIREZ - The most dynamic hitter of his era and the strangest star since Rube Waddell.

8. KEN GRIFFEY JR - The best player of the 1990s and after the steroid clouds lift, will be the era's most loved slugger.

9. PUDGE RODRIGUEZ - Mitchell Report or no, he was the best all around catcher of his generation.

11. PEDRO MARTINEZ - The most fun pitcher of this era, his 1999 season has to go down as one of the greatest in baseball history.

12. ALEX RODRIGUEZ - Say it with me, Yankee fans. "He's the most talented player to ever wear the uniform!" He might break Pete Rose's hit record and Barry Bonds' home run record before he's done!

13. DEREK JETER - Anyone who says he is overrated doesn't get it. He's the link on the field to Mattingly, Berra, Mantle, DiMaggio and Gehrig... and he knows it.

14. MARIANO RIVERA - Part of the 5 all time greatest relievers along with Fingers, Gossage, Sutter and Eckersley.

15. FRANK THOMAS - Towered over the other sluggers of his era. His comeback season of 2006 with the A's clinched it for me.


GROUP TWO - ON THE CUSP

THE DON MATTINGLY CATEGORY - DON'T GET HURT... YOU ARE ALMOST THERE!

2. MIGUEL CABRERA - Has a jaw dropping back of his baseball card and added a home run title to his resume. An MVP would go a long way.

3. MAGGLIO ORDONEZ - Slowly but steadily piling up All Star seasons. Will have to pass some heavy duty milestones to get in, but the rate he's playing he just might.

4. ROY OSWALT - With 6 legit ace caliber seasons and some post season heroics, he's getting closer to Hall of Fame talk.

5. VLADIMIR GUERRERO - I told you I am tougher on hitters. Vlady is an elite player... but he needs to pass some key career milestones in order to get in.

7. JOHAN SANTANA - The best pitcher in baseball for the past 5 seasons. He's half way there.

8. ICHIRO SUZUKI - A few seasons away from removing the "include what he did in Japan" provision from his candidacy.

9. ALBERT PUJOLS - 2 MVPs, the NLCS MVP, October highlights, leading the Cardinals to the 2006 title... give us 2 more years and avoid scandal!

10. ROY HALLADAY - He has five seasons where he is an unquestioned ace and has a Cy Young to show for it. Don't get hurt Doc!

GROUP THREE - YOUNG STARS WORTH KEEPING AN EYE ON

THE DWIGHT GOODEN CATEGORY - DON'T FLAME OUT... IT'S EARLY BUT YOU ARE OFF TO A GREAT START

1. EVAN LONGORIA - Is there anyone who doesn't think he will be one of the elite players?

But he already has a Cooperstown clip with his save in game 7 of the ALCS and he looks like a special player.

(I confess... Price is on here because his save in the ALCS will be a lot easier to swallow if he becomes a Hall of Famer! It's MY list.)

3. BRANDON WEBB - Already with a Cy Young and two runner up seasons, he's getting the hard part of the resume over with.

4. BRIAN McCANN - In each of his three full seasons in the bigs he has been the best hitting catcher in the NL. Keep that pace up!

5. DUSTIN PEDROIA - 2 full seasons in and he has a Rookie of the Year, an MVP, a World Series ring, a Silver Slugger, a Gold Glove and 5 post season homers. Can he improve?

7. JONATHAN PAPELBON - He already has the obligatory World Series clincher clip. He has talked about himself already at age 27 as a potential Hall of Famer. Pile up your saves Paps... you already have Trevor Hoffman, Lee Smith and John Franco beat!

8. BOBBY JENKS - Don't look now but he's a two time All Star who has that World Series clincher under his huge belt. If he piles the saves up... who knows?

9. HANLEY RAMIREZ - Will win an MVP someday. Probably not with the Marlins.

10. PRINCE FIELDER - 3 seasons in the books... all terrific. Is working out his daddy issues with the long ball.

11. JOE MAUER - If he keeps up this pace of great numbers as a catcher he might wind up with a great case for the Hall. 2 elite years down, 8 to go.

12. JUSTIN MORNEAU - 1 MVP in the books and nearly with a second one, Morneau is putting up elite numbers and isn't even 28 yet.

13. DAVID WRIGHT - Will probably win an MVP sooner rather than later. Already had 4 great seasons in the books.

15. RYAN HOWARD - He's got the MVP and the World Series heroics out of the way early.

18. TIM LINECUM - He was called "The Franchise" before he had his Cy Young season. Stay healthy and win big in that pitchers park, Tim!

19. MICHAEL YOUNG - Don't look now but Young has 5 great seasons under his belt.

THE HAROLD BAINES/KIRK GIBSON CATEGORY - TERRIFIC CAREER BUT THE HALL OF FAME CHANCES ARE FADING... GIVE IT ONE MORE PUSH

1. MARK TEIXEIRA - The Yankees better hope he blossoms into an MVP. They are already paying him like he is.

2. TIM HUDSON - Looked like an Ace early on but injuries are catching up.

3. KEVIN YOUKILIS - If he piles up a few batting titles in the next few years it will get interesting. But it's a long shot at best.

4. DAVID ORTIZ - The most loved Boston sports figure from the greatest decade in Boston sports history just doesn't have enough great years... and his bat is slowing down!

5. JOSH BECKETT - Doesn't it seem like he has more true ace seasons than 2?

6. ARAMIS RAMIREZ - A terrific player with an All Star resume who can't seem to bust into the elite column.

7. JIM THOME - Any other era, he'd be a lock. But in his prime, he wasn't even the second best slugger on his own team!

8. GRADY SIZEMORE - 4 All Star caliber seasons in 4 seasons is great, but he needs to crank it up to MVP caliber.

9. LANCE BERKMAN - A terrific slugger who is doing it in the wrong era. Needs to pass some milestones to get my vote.

11. NOMAR GARCIAPARRA - Maybe a batting title or two plus some more October heroics could put him over the top, but time is running out.

12. JOE NATHAN - Was better than Rivera, K-Rod and Papelbon last year. Needs that ring to get into the discussion!

13. CARLOS DELGADO - Another slugger who peaked in the early 2000s. Needs an MVP season late in his career.

14. CARLOS BELTRAN - A great talent but only 2 or 3 great seasons to show for that talent. Needs a dominating season.

16. JAKE PEAVY - Has the Cy Young but needs to be a consistent ace... wherever he ends up.

17. TREVOR HOFFMAN - I don't care how many regular season saves he gets... he's blown way too many big games. Until he clinches the big one he belongs on the outside looking in.

18. BARRY ZITO - Might end up in the bad contract Hall of Fame.

19. OMAR VIZQUEL - His defense was so good he might make it in. It would be nice if he was more of a threat with the bat.

20. ALFONSO SORIANO - Injuries are keeping from being a monster in Wrigley... might cost him a shot at the Hall.

GROUP FIVE - NO WAY THEY BELONG IN THE HALL OF FAME

THE JERRY REMY CATEGORY - YOUR HOME TOWN FANS WILL LOVE YOU... BUT ONLY THE BIGGEST HOMER WILL CALL YOU A HALL OF FAMER

1. CARLOS PENA - Late bloomers tend not to make the Hall.

2. CARL CRAWFORD - Had his best years when the Rays were at their worst.

3. ROCCO BALDELLI - Man those injuries and his illness derailed a truly exciting career.

4. TROY PERCIVAL - Had the great closer monent with the 2002 Angels. If he did it again with the Rays, I might reconsider.

5. CLIFF FLOYD - A nice player but had only three seasons of real note.

7. JASON VARITEK - I love The Lobster... but the numbers just aren't there.

8. MIKE LOWELL - The two World Series rings, the World Series MVP and tens of millions of dollars will be Mike's consolation prize.

9. J. D. DREW - Those early injuries took a toll on any shot he might have. Turned into a clutch post season performer.

10. DEREK LEE - Nice solid player... but it's not the Hall of Nice Solid Players.

11. JIM EDMONDS - Better career than I realized looking over it... but not enough for the Hall.

14. TODD HELTON - For whatever it is worth he's probably the most loved player in Rockies history.

15. GARRET ANDERSON - If he played in a big market, he would get some Hall of Fame consideration. (No, Anaheim is NOT a big market!)

16. TORII HUNTER - He could field and hit and run and hit with power... he was good at all of them, but not great which is the standard.

17. ANDRUW JONES - How great would this guy have been if his head was in the game?

18. DEREK LOWE - The peaks were incredible for Lowe... and the valleys equally breath taking.

19. JOHNNY DAMON - I wonder if he'll ever get that standing ovation at Fenway ever again.

20. JORGE POSADA - I wonder if this beloved Yankee will ever manage the club.

21. ANDY PETTITTE - So THAT'S why he always followed Roger Clemens!!

22. MARK MULDER - Man he started off fast... but injuries made him unemployed.

23. VERNON WELLS - It looked like he was about to bust out into "Great Player Land." Instead he is merely a darn good one.

So there you have it...
15 players I think are in right now (and at least 2 of them retired in this off season.)

And 10 who are almost there.

It would be interesting in 5 years to see how this list holds up.
And yes, I'll be doing Sully Baseball in 5 years!!!

Tell me your take... info@sullybaseball.com 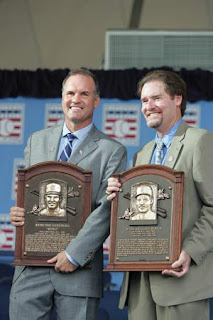