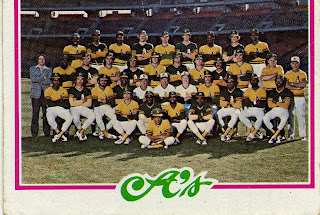 But some teams managed to throw some variety into the dull team picture. Here are some of the better ones I found in my parents garage.

There was an impressive amount of organization for this picture. Usually the team shows up in uniform and they line up. But the A's had to make sure the guys who were supposed to wear the yellow uniforms didn't wear a green uniform by mistake. 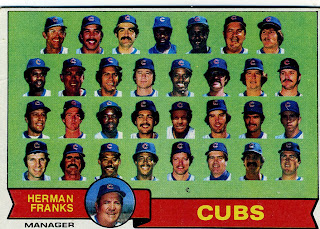 The Cubs went with the radical "floating head" team picture.
I assume this was a huge pain-in-the-ass pre-Photoshop process creating this picture.
Either that or there was a giant Green room where the Cubs players stuck their heads through a hole like Whack A Mole. 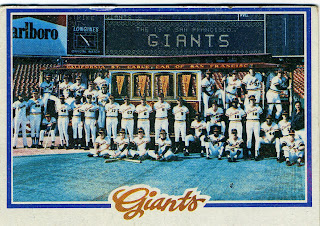 The Giants of the late 1970s and early 1980s liked to mix it up and change their team picture looks.

Here the Giants rode a Trolley into left field at Candlestick Park.
This is misleading because it implies that there was any form of reliable public transportation going to the 'Stick.

A trolley like this would be good if you were trying to get from North Point to Market as slowly as possible and being squished next to tourists. 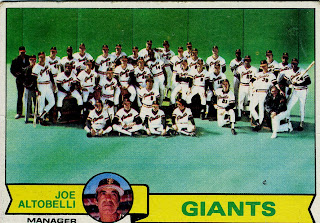 The Giants ditched the trolley and decided not to take their picture by the left field wall the next year.
Here's the problem... I don't know where the hell this picture was taken.

Candlestick didn't have that green wall if I remember correctly.
Maybe it's the Spring Training complex.

Maybe they were in San Diego and the traveling secretary said "Oh shoot! Did we take a team picture?"
The picture itself looks a little disorganized. Some are standing. Some sitting on what looks like a trunk.
#39 Bob Knepper looks like he is leaning back on a bunch of other players.

Maybe it is a trust exercise. 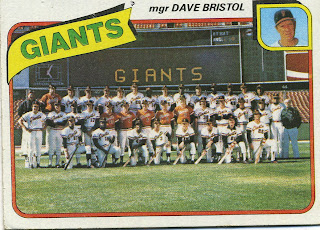 Back to the left field wall at the 'Stick.
No trolley this time but the coaches get to wear the cool orange shirts and guys in the front row get bats.

The Giants label now covers up the Marlboro sign.
Maybe someone complained. 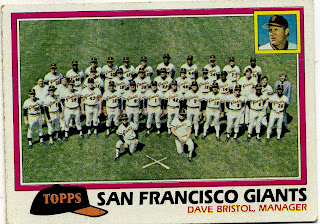 My personal favorite.
No kneeling. No sitting. Everyone stand up and look up.

I'm guessing the photographer said "OK, now everyone look up like you are seeing the mother ship in Close Encounters!" 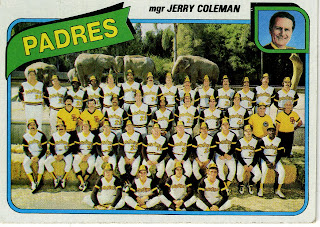 This one is the coolest.
The brown and yellow Taco Bell uniforms would make any team picture unsightly.

But this one was taken when the Padres were at the Zoo!

I never knew baseball teams went on field trips!
I hope they all remembered to bring their permission slips.