I miss the Montreal Expos

Yes I know they had to move. I saw a game in Stade Olympique and I can say honestly it was the worst place I've ever watched a baseball game. And keep in mind I HAVE seen games in Candlestick, McAfee Coliseum, Shea Stadium, Three Rivers Stadium, Cleveland Stadium and Veterans Stadium. So I KNOW bad stadiums!

And yes I know the last few years of the teams existence was a complete joke. They were owned by the other clubs, they weren't allowed to have September call ups and had to play part of the season in San Juan.

So logically I know the move to Washington made sense. 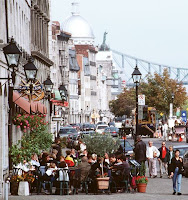 1. Montreal is a REALLY beautiful city.

Seriously, go there and you won't believe you are still in North America. You'd swear you were in Switzerland.

2. Yeah Stade Olympique was a terrible place to play and watch a baseball game. But that’s where Bruce Jenner won the decathalon… and it’s always cool to be reminded of Bruce Jenner.

3. The cool beach ball hats. I always loved the uniforms and they were one of the few teams that could pull off the white front of a cap.

And the logo itself was cool. It took me a few years to realize it was an M for Montreal, an E for the Expos and a B for Baseball. 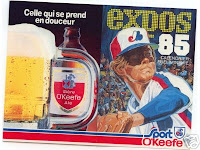 4. Baseball games in French! It gave Montreal Expos games such an exotic feel to them. Yeah the Blue Jays were in Canada too, but they were in English. I used to listen to the games on MLB.com and see I could follow the games with my high school level French comprehension. Also hearing the batters announced in French was awesome. “Le recevaeur, Gary Carter!” 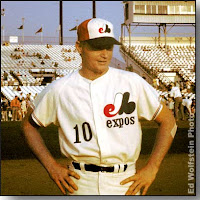 5. Keeping the French theme going, having French nicknames for the players was cool too. Le Grande Orange for Rusty Staub. Le Chat for Andres Gallaraga.

6. Think that whole “swimming pool in right field” thing is original in Phoenix? Ha! Rusty Staub used to launch balls into the swimming pool at Parc Jarry in the 1970s!

7. The Expos had so many great players over the years that only die hard baseball fans followed. Gary Carter, Andre Dawson, Tim Raines, Jeff Reardon, Larry Walker, John Wetteland, Pedro Martinez, Vladimir Geurrero and Moises Alou all became stars elsewhere. But they were already putting up star numbers in Montreal.

8. Some familiar faces made cool cameos in Montreal.

Tony Perez, Bill Lee, Mark Langston and Bartolo Colon among others had some success north of the border. And Pete Rose got his 4,000th hit in an Expos uniform. Bet you forgot that!

9. The heart break of the two strike years can’t help but make you feel for Expos fans.

They got to the 9th inning of the deciding game 5 of the 1981 NLCS before Rick Monday homered off of Steve Rogers, giving the Dodgers the pennant in a silent Stade Olympique. 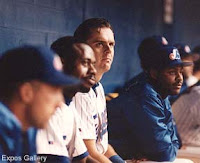 It was worse in 1994 when the Expos had the best team in baseball when the strike hit. The team that could have been Montreal’s best shot at winning a World Series. Instead it was the beginning of the end of baseball in Quebec. 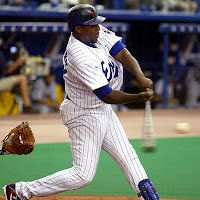 10. The post 1994 middle finger than the Expos gave baseball. They had no crowds, they had no revenue, and after the contraction threat for a while they had no owner. MLB owned them and wouldn’t allow them to recall minor leaguers and made them play part of the season in San Juan.

And yet They contended in 1996. And they putting winning teams on the field in 2002 and 2003. Often times despite no money nor fan support would put a better product on the field than the Mets or the Dodgers.


So yeah, the Expos had to move.
Baseball could flourish in Washington and it was the right thing to do.

But it doesn’t mean I can’t miss a scrappy bunch of anonymous superstars getting introduced by the public address announcer in French!