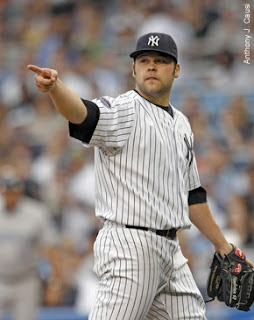 Andy Pettitte is back with the Yankees and already the hands are wringing in Yankee land again.

"What will Joba Chamberlain's role be?"

We are approaching the 2009 season and he still doesn't have a defined role?

Look, I was an advocate that he should be the heir to Rivera.

But he showed he could be a fine starter or a fine reliever.

As he goes into season #3, here's a revolutionary and controversial idea:

All the coddling and babying and Joba rules STILL landed him on the DL. And who knows how he is handling it mentally. Getting a DUI in the off season isn't a good sign!

Look, as a Red Sox fan, part of me giggles at the idea of the Yankees hemming and hawing and wasting this talent because they are too chicken sh*t to make a decision. But it is beyond comical.

My boys were on the fence with Papelbon... should he start of should he relieve? The Sox picked a role and stuck with it.

And my boys dealt with injuries. Lester had f---ing CANCER. He's in the rotation now and is good.

Mariano Rivera had a terrific season last year and his third top 5 finish for the Cy Young in the last five seasons.

Without some help from Brian McNamee?

Then again putting Joba in with a healthy Wang, a happy Sabathia and veterans like Andy and Burnett could give the Yankees a solid 5 and make either Kennedy or Hughes expendable.

It's moronic. That's not my opinion. That's a fact I could prove to a jury in a court of law.

Pen or rotation.
The Rivera for the 2010s or a stud in the rotation.

Harvey Dent it and flip a coin.

Or, as a Red Sox fan, I could say "Stay the course! Maybe by 2018 his role will be defined