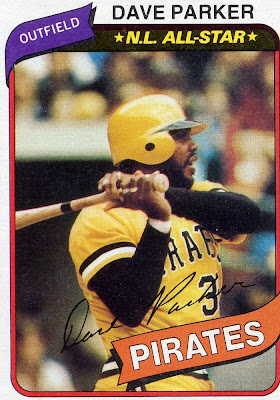 Two weeks ago, I honored those racial neutral cartoons that were on the back of the 1980 Topps Cards.

Specifically I found one that turned Cliff Johnson into a white dude.


Today let's take a look at another one...

Dave Parker, one of the best players in the late 1970s had a cartoon on his card.

And it isn't a general baseball pose.
It's a specific cartoon for Parker.

The sign the cartoon fan is holding up says "DAVE."

And yet it's a white guy!

That's basically a decision by the artist.
"I know it's the Cobra... but I am going to draw him like Potsie Webber."