HALL OF FAMER JAY BELL!!!! The only way these writers can learn a lesson! 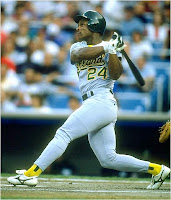 Rickey Henderson is in the Hall of Fame... and it wasn't unanimous.

Some voters... 28 of them... didn't think the All Time Stolen Base king, the All Time Runs Scored leader, the second All Time leader in walks, the 1989 ALCS MVP, the 1990 AL MVP, the greatest leadoff hitter of all time isn't worthy of the Hall of Fame.

2 voters put Jay Bell, a nice player who had 3 or 4 nice seasons and scored the winning run of the 2001 World Series but not exactly an immortal on their ballots to be enshrined with Willie Mays, Babe Ruth, Jackie Robinson and Hank Aaron.

And how much do you want to bet some of those those 28 people who left Henderson off put Bell on!

Why is this?
Do those voters REALLY think that Rickey didn't merit a Hall vote or Bell did?

There are two moronic tendencies of Hall of Fame voters that keep Rickey from being voted in unanimously and allow Bell to get any votes.

1) No player has ever been elected in unanimously and voters feel that no player should be because that would imply they are better than those already voted in. Or something stupid like that.

2) Some voters throw a vote to a player they knew as kind of a favor so they don't have the indignity of having zero Hall of Fame votes.

And the only way writers will end this stupid habit is to have a wonderfully insane scenario happen that isn't 100% farfetched.

- Enough voters leave off a sure fire Hall of Famer to make sure they aren't unanimous that it takes them off the Ballot completely. (Mike and Mike brought this up on their show pondering how someone like Greg Maddux would be left off the ballot forever due to this stupid mindset.)


- Enough voters throw a sympathy vote to a non deserving entity that they get elected into the Hall of Fame.


Imagine that... enough Corky Simpsons of the world forget to put Rickey on the ballot and enough nitwits who say "Well, is he a FIRST BALLOT Hall of Famer?" use the ballot as a protest that he gets less than the 5% needed to stay on.

And I didn't pick Jay Bell by accident.
Jesse Orosco got a single vote... but Bell got plural votes.

And I think it would be worth it to have that happen...
For example this year's class.

It would be worth it to have Rickey Henderson off the ballot and Jay Bell in the Hall of Fame if it meant forever changing writers.

Because let's face it, Rickey would get in with the veteran's committee. They might even do an emergency vote.

And it would also be fun to see all the writers who did vote for Bell but not for Henderson have to explain their vote.

Also the awkwardness of the Hall of Fame ceremony as Jay Bell stands up there in front of Stan Musial, Frank Robinson and Yogi Berra... holding his plaque that says "JAY BELL... A PRETTY GOOD PLAYER"... probably feeling like Kevin Kline in Dave wondering "What am I doing here?"