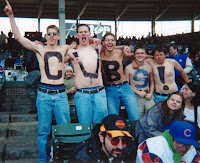 I'm not sure who to root for in this year's Super Bowl.
Neither the Giants nor the Patriots are in it, so I have no emotion invested in the outcome and in all honesty I'm not that big of a football fan.

Chances are during the game I'm going to be thinking "I wonder where Adam Dunn is going to end up."
I want a close game. If the Cardinals win it... good for them. If the Steelers win it, Pittsburgh will go nuts, and good for them.

But Cub fans... you had better get a terrible towel and root hard for the Steelers.

If the Steelers don't win, you will be watching yet another "Never in my lifetime" title in your lifetime... all while the Cubs go into century two of waiting for a ring.

It's getting lonely at the top of the "championship futility" list I am sure. You've lost your two brothers in baseball when the Red and White Sox both won.

If the Cardinals win, you'd have only one more "Pre 1950" playoff drought for a team (the Indians.)

That can't be good.

You've GOT to be rooting for the Steelers.

Besides, I am sure some of you are still mad the Cardinals left Chicago!