ENOUGH WITH THE NFL DRAFT! 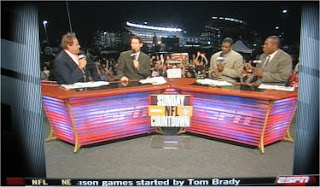 It's bad enough the draft is covered live on TV in its entirety... but what is the point of the pre draft coverage?

Nobody knows what the teams are doing.
Nobody is in the war room.
And most of the rumors are made by the agents trying to drum up interest for their client (lest we forget Drew Rosenhaus on his cell phone talking to Willis McGahee who was sitting right next him... both pretending to be talking to another team.)

So when I turn on KNBR or ESPN radio and here a discussion on the draft it should be this long.

"Who do you think your team is going to pick?"
"I dunno."
"Me neither. Let's talk baseball." 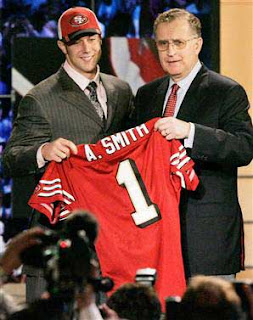 But then comes the coverage (and God help anyone who actually ATTENDS the draft to cheer or boo.)

And it is basically hour after hour of the following:

"Well looks like the Bengals are drafting this kid out of college."
"Yup, here are the clips of him in college playing well."
"Is this a good pick or a bad pick?"
"Well we don't really know because he hasn't played in the pros yet, but I'll pretend that I can predict the future."
"That's great. The Lions are on the clock."

Seriously, there is no more worthless event on TV.
And don't give me the Oscars or some other award show. Yeah those are long and drawn out, but at least they are difinitive.

"The Oscar goes to Helen Mirren." BANG! She wins it right then and there. No projections. No Mel Kiper saying "Well, we project Helen Mirren as being an Oscar winner in 3 years."

No, she's there. She's holding the Oscar. That's all there is to it.

And how can you tell if someone is a bust or not?

I'm sure the Chargers thought they were getting a Roger Staubach/Joe Montana type when they picked up Ryan Leaf.

I don't recall Chris Berman saying "Well, he's talented but is as mentally stable as Private Pyle sitting on the toilet loading that gun."

And how about those Eagle fans booing Donavan McNabb, who would lead the Eagles to their best run ever, because they didn't pick Ricky Williams. Yeah, Ricky and Philly would have been a good match. New Orleans and Miami were too stressful for Ricky before he became Matthew McConaughey in Dazed and Confused. 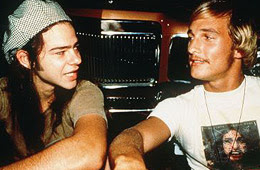 And how many people were going nuts when Tom Brady was selected like 423,111th in the draft?

What they should do is show what the draft was 5 years ago and have those players come back to either boos or cheers and analysis.

So come ESPN! Put it on ESPN 2 or 3 and show some REAL sports now.
Have you noticed there's a baseball season going on now? Or the NBA playoffs? Or the Stanley Cup playoffs? 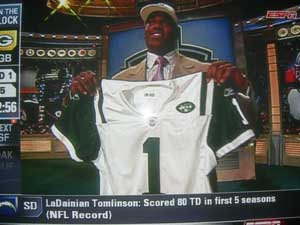