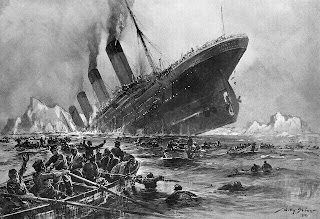 Yeah the Yankees have had bad starts before.
Yeah there has been a Chicken Little panic in the Bronx almost every year in the past 5 or 6 only to see the Yankees run off a big win streak and win the division... with each time Joe Torre praised for "His best managing job EVER!"

But there is something ominous about this Yankee start. Something that could be the iceberg for the Yankees 12 year post season run.

It's not the 7 game losing streak and the 8 game streak of 6 runs or more.

Or that they have had only 6 out of 21 games where the starter goes at least 6 innings.

Or that in 10 of 21 games the starter has lasted less than 5 innings.

Or that they are 0-4 against the Red Sox after having a 2 run or more lead in each of the games.

Or that Vizcaino, Myers, Farnsworth, Bruney and Proctor seem to be on a pace for 162 appearances each.

Or that it isn't even May yet and the Yankees have made at least 3 panic moves (Pettite out of the bullpen? Rivera coming in the 8th? Phillip Hughes being rushed up after saying he'll spend the year in the minors.)

They've had bad starts and bad pitching before.
But they always could count on Rivera.

It's nearly May.
He is tied with my two year old sons for saves.
He has two blown saves. Any question of who the most valuable Yankee of the Torre years will be answered pretty quickly if Rivera falls apart.

He's 37. He's been a dominating reliever since 1996. It's an amazing run... but if it is over... then the great plan B that won them a division in 2005 (Yeah the starters and relievers stink, but we'll score 9 runs and Rivera will close the 9th) will be scrapped.

You want to trust Farnsworth with the 9th?

Yankee haters, don't get too giddy... but one month in, the Yankees are taking on water fast and the Torre/Rivera years might just be winding down.

Let's see if Kate and Leo are doing that flying thing at the bow.
Posted by Sully at 11:13 PM