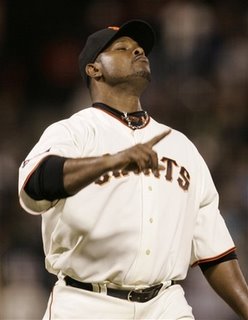 Hey Giants! Armando Benitez got a save the other day. QUICK! TRADE HIM RIGHT NOW! For God sake, his value will not be higher than it is right now.

Not 2 weeks from now. NOW! As you are reading this, trade him.

And don't hold out!
If the Marlins offer you a backup reserve catcher, say "OK!"

If the White Sox say "We'll give you a used copy of Big Mamma's House 2 in exchange for Benitez" TAKE IT!

If the Padres say "We'll give you a sip of Tab" it's a STEAL!

Benitez needs to be off of the Giants right now.
Not just because he blows saves right and left, even though nothing can dishearten a team like multiple blown saves in a row.

It's not just because the fans in San Francisco boo like crazy the nanosecond he removes his jacket in the bullpen. (And fans in Baltimore and in Queens chuckle all the while thinking "He's YOUR problem now!"

(It's interesting that I have lived in both New York and the San Francisco areas when Benitez has been a closer and both regions have taken a border line perverse pleasure in booing him. Must be a coincidence.)

No, this guy could possibly be the least able closer I have ever seen... and like Brent Musburger, keeps getting chances.
Well for the Giants sake it has to stop.

Stat geeks claim that the closer is an overrated position and that it doesn't matter what inning a pitcher pitches in. They also claim the idea of being a clutch player or a choker is a myth.

To them I say "Armando Benitez." All the guy has proven over the years is that the 8th and 9th innings matter a hell of a lot more. You see, if you have more runs at the end of the 9th inning you win the game. Odd that stat heads seem to miss that point.

Oh yeah, as talented as Benitez is, when the big game is on the line he shows all the toughness of Don Knotts.

Man I feel for Bruce Bochy who his entire managing career turned to potential Hall of Famer Trevor Hoffman in the 9th.
Now he has a guy that Scott Norwood, Calvin Schraldi and John Starks call a choker

I had no clue what the Giants were thinking when they signed him. Maybe they saw some nice numbers and had a good scouting report or two, but anyone who SAW him knows he is a time bomb.

And SURPRISE! He broke in with the Giants blowing an 8-4 9th inning lead. Oh and when the Giants clawed their way back to first place last summer... who was there to blow 3 straight saves and torpedo the season. Guess!

And who endeared himself to the fans after blowing a save to the mighty Nationals last July by walking 2 and letting up 2 hits in the 9th by saying "I did my job?"

His resume for blowing the big game is staggering. His reputation is so secure as a slayer of title dreams that Buster Olney wrote about his failures and worthlessness in 2003... and he's changed teams 4 times since then!

He gets a lot of strikeouts. He saves a pile of games from April to September. But once the leaves turn brown, so do his boxers.

I can almost hear his agent in negotiations.

GM: Looks like he let up a game winning grand slam to Albert Belle in game 3 of the 1996 Division Series.

AGENT: It's one game!

GM: That same year he let up a game tying homer to Derek Jeter in the ALCS.

AGENT: C'mon! That kid Jeffrey Maier stole that ball. That wasn't legit. Can't blame my client for that.

GM: In 1997 he let up a 3 run game winning homer to Marquis Grissom that changed the momentum of the ALCS.

AGENT: We ALL have a bad day.

GM: Later in the same series he let up the pennant winning homer to light hitting Tony Fernandez.

AGENT: Fernandez was due.

GM: In the 1999 playoffs for the Mets he let light hitting Jay Bell tie a potential clinching game in the 8th with a double.

AGENT: They won the game. That's all that matters.

GM: Later in 1999, he let Braves tie the score in the 10th inning of game 6 of the NLCS, a game the Mets needed to stay alive, when light hitting Ozzie Guillen singled home a run.

AGENT: Ozzie is a tough hitter. One of the elites.

AGENT: If he was so light hitting, how'd he crush one of the elite closers in the game? huh?

AGENT: Hey! At least he GOT to the World Series.

GM: Hmmm, when the Mets were going on their post September 11th dash for the 2001 NL East crown, Benitez blew a 4-1 lead in the 9th to the first place Braves.

AGENT: What are the chances of that happening again?

GM: 6 days later he blew a 5-1 lead in the 9th to the same Braves team, knocking the Mets out of contention and making New Yorkers feel like he had spit on every fireman and police officer's children.

AGENT: Those are 10 isolated playoff and pennant race failures. You need to look at the big picture.


That agent must be convincing someone he is worth it. Or else he gets the GMs drunk and get the contracts worked out the same way whaling ships got their crews.

The Giants keep bringing him out. The logic being "Well, nobody out there has closer experience before and we know what we have with Benitez."

Yeah, you know what you have. An incredibly crappy closer.

How does that make sense?
It's as if you are making a dramatic movie and you have 2 unknown actors and Tony Danza.
Do you say "Well, who knows what the unknowns will give us... might as well cast Danza"?

NO! Maybe you can get a great performance out of the unknown!
Casting Danza would be INSANE!
(See "Crash" if you don't believe me.)

The Giants are loaded with young pitchers. How could they POSSIBLY be worse?
And if the new closer has some failures, you can mark it up to "growing pains" as opposed to Benitez who is just pain.

Maybe they are auditioning him.
I heard one of the Giants people dutifully say "He had a few clutch saves in spring training."
Because heaven knows there is no pressure like a 9th inning game in Spring training where Armando has to stare down Double A players wearing #93.

You might as well say "He won a few games on the Playstation."

So seriously. If the Devil Rays offer you "some curly fries to be named later" for him TAKE IT!
The fries will be easier on your heart in October. 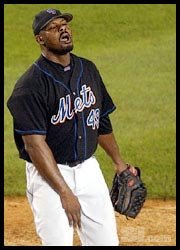