We've got a magical pitcher! 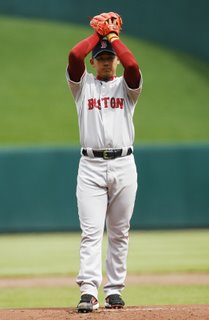 I'm at a little bit of a loss of how to react to Daisuke Matsuzaka and his kick ass start with the Red Sox.

First of all in the off season, I was confused by how my fellow Red Sox fans could get so pumped up about him. Save for a few games of the wretched World Baseball Classic, nobody had seen him pitch. So basically everyone was pumped for Matsuzaka based on reputation in the Japanese league.

We heard about how he pitched 250 pitches in 17 innings in a high school tournament in Japan. Which either means he is awesome and durable or Grady Little was managing the team.

We heard he dominated the Pacific League in Japan. Of course for every Hideki Matsui, Ichiro Suzuki and Hideo Nomo, there is also a Kaz Matsui and Hideki Irabu, so it isn't always a flawless transition.

The cool thing about the influx of Japanese players is that it is truly opening up the US game to all of the world's stars and creating a counterbalance to expansion. More teams? Better find new sources of players other than the cane fields of San Pedro de Macoris in the Dominican Republic and Serra High School in San Mateo California.

The sad thing is we never got the real chance to hear Harry Carey, Bob Murphy and Phil Rizzuto butcher their names during a play by play.

But one thing is certain... baseball fans in the 60s and 70s all across the country are referring to these stars as "That Japanese kid... however the hell you pronounce his name."

(Another note. His name is Daisuke Matsusaka. And his first name is pronounced Dice-Kay. Why the hell isn't it spelled that way? We're already translating his name from the Japanese characters. What's the point of not spelling it phonetically? Seriously. Why not add a few silent Gs and Vs in it just to F us up some more. But I digress.)

Everyone in the off season was going bananas over the fact that they spent more than $50 million to talk to him. Which is a little misleading. It's not like they forked over 50 million pigs and called him up to say "Hi Daisuke. Did you see The Departed? Yeah it was good. Why do you think Sanjaya hasn't gotten voted off yet?"

They paid that to negotiate with him. Yeah, a lot of dough, but would the Red Sox spend money stupidly? I mean other than for J. D. Drew, Matt Clement, Edgar Renteria and every other move since winning the World Series.

Maybe Theo and company saw something. Maybe he was throwing 150 MPH. Maybe he was like Sidd Finch, except this time not be a hoax by George Plimpton. 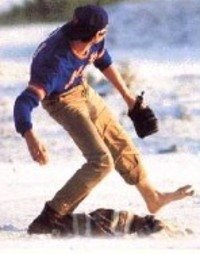 (A note on Plimpton, whom I miss... am I the only one thinking he is about to publish a kick ass book about what it is like to be dead? Kind of like Paper Lion, Out of My League and Open Net for the afterlife. But once again, I digress.)

So in all of the off season blathering, I hear about the Gyropitch.

That's what it is. He's not just a pitcher. He's a MAGICAL pitcher. He throws a pitch that nobody has ever seen. It's not like we signed Pedro again. We signed Gandalf!

He'll get on the mound, yell "You Shall Not Pass!" a few times and throw his magical pitch and hello Cy Young. 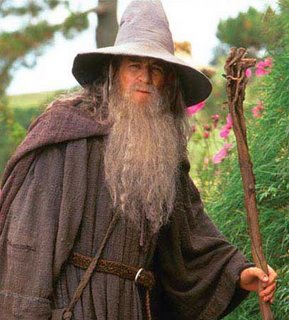 If we could sign the angels from Angels in the Outfield, then we'd be all set.

So he pitches yesterday... and he kicks the Royals butt. But of course that should tell you something right there. The Royals lineup was filled with rookies, second year players and guys who don't exactly strike fear in the hearts of men. One writer mentioned that they sat two of their strongest hitters, Reggie Sanders and Mark Grudzielanek (sp?). When Sanders and Grudzielanek are your strong veteran hitters... that should also tell you something about the competition.

(They DID smack Schilling around... hopefully he's only getting warmed up.)

And also keep in mind Hideki Irabu had a great first game as well.

BUT he did what he was supposed to do. He got the outs, he made the Royals look silly and gave us Sox fans a glimmer of hope.

I love ace pitchers. There is a wonderful bad ass quality to a guy who every 5 days takes the mound with the attitude of "You can't POSSIBLY beat me."

Dave Stewart had it in his prime. As did Jack Morris, Orel Hershiser, Randy Johnson, Fernando Valenzuela, Ron Guidry and Greg Maddux.

Very few have it now. I would venture only Johan Santana does now.

As a Sox fan I have had the pleasure of seeing 3 pitchers like that throw for the Sox. When Clemens was on the mound, it was always awesome. I'd mark those games in ink as a win.

Pedro was my favorite of all. Not only would he win, but he'd do it with a combination of a hilarious sense of humor (the Fox cameras caught him shaking his head and laughing at Sandy Alomar while throwing 6 no hit innings in the 99 playoff clincher) and a sense of danger (oh, he'd hit a few batters.) 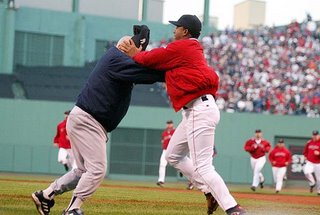 Throwing Don Zimmer to the ground was a combination of both.

And, while not as long term as Clemens or Martinez is Schilling, whose 2004 was magical and the bloody sock made it Roy Hobbs-esque.

We'll see when he faces an actual major league team if he actually throws the magic pitch.
Posted by Sully at 2:50 PM