Our Rivalry is Better than Your Rivalry 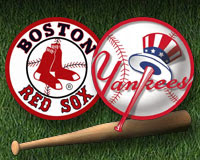 I'm sorry, the rest of baseball...
You may be sick of hearing about the Red Sox and Yankees, but it's the best rivalry in baseball. Nobody comes close. The games are more exciting, the fans are more into it, there seems to be more desperation for a win from both sides and it is good for baseball.

Spare me the Cubs and Cardinals comparison. What is the great Cubs and Cardinals show down that can compare to Bucky Dent? To back to back game 7's in '03 and '04? To Aaron Boone, Dave Roberts and A-Rod slapping the glove? Not to mention Ted Williams vs. Joe D. 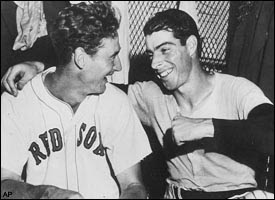 Dodgers and Giants come closest. Between Bobby Thomson's home run, the playoff series of 1962 and the season finales of 1982, 1991, 1993 and 2004... it's pretty intense.
But San Francisco and Los Angeles fans aren't talking baseball in January.
Nothing is like Sox/Yankees.

And tonight's game? Yet another wild game that lives up to the billing.

- Those green uniforms were a disgrace. Seriously, THIS is how they decided to honor Red Auerbach? How about having them dress like the Red Sox and win a ballgame? Save the silly green shirts for when the Devil Rays are in town. This is Sox/Yankees! The teams have the same uniforms from the 1930s, and tonight the Red Sox looked like the Portugese National Team.

- The moment Coco Crisp fell into the bullpen, trying to bring back A-Rod's second home run in vain, might very well be the moment I fell in love with the 2007 Red Sox.

- Um... A-Rod is pretty good, isn't he? In fact this start and this whole season might be the greatest exit strategy in the history of American sports. After years of Yankee fans booing him and the media crushing him, he's going to have the greatest year of all time and have everyone BEG him to come back. But that's the subject of another post.


- A-Rod's dramatics have been very sexy and good for John Sterling getting his "It is High, It is Far, It Is Gone" call onto Sports Center... but it also means that the Yankees have been trailing teams like the Devil Rays, Orioles and Indians in the late innings by multiple runs. Gee, I wonder if that will work in the post season.

- The Bridge to Mariano is less reliable than the Bridge on the River Kwai.

Yankee fans had better hope that that is a statistical fluke (a la Rivera blowing his first two games in 2005... only to have his best overall year.)

- Where the hell was Jonathan Papelbon? Please tell me he was at Legal Seafood and he's not hurt.

Who knows? Maybe we have a left handed stud in the pen now. Hell, he has more saves than Mariano Rivera! Okajima should legally change his name to "The Other Japanese Guy."

- A-Rod slugs 2 home runs and drives in 4 of their 6 runs... why do I feel that the New York papers will focus on his making the out in the 9th?

- Man! One game down, 18 to go between the Sox and Yankees. Let's not get too ahead of ourselves, Red Sox fans... the Sox always do well against the Yankees in April. But any day the Sox come from behind with Rivera on the mound, the sky just seems bluer, birds chirp sweeter, food tastes better and life is just more enjoyable.

- Maybe it was the green unis! Better wear them the rest of the season!