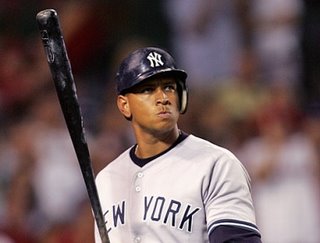 I know I am not supposed to. I know as a Red Sox fan I should be taking huge glee over his misfortune and abuse by Yankee fans.

I should always be thanking whomever upstairs I need to thank (God? Zeus? The ghost of Tom Yawkey?) that the trade that would have sent Manny Ramirez, the single funniest superstar in sports and MVP of the World Series we waited for our whole life, packing for Alex Rodriguez, who has the big game skills of Timmy Lupus and the self confidence of Sally Field just before she won the Oscar in 1985.

I should chuckle with glee that since homering off of Lowe in game 4 of the 2004 ALCS, he has as many post season RBIs as my two year old sons. Which is amazing when you consider game 4 and 5 were extra innings... that's more than 12 straight playoff games without knocking someone in.

I should have a devilish grin on my face whenever I think of his lone playoff highlight... the moment that thus far defines his career... the moment he slapped the ball out of Arroyo's glove in 2004. 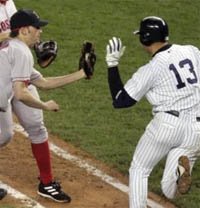 OK. I do have that grin about that. I admit.

But the anti A-Rod insanity is getting a little bit crazy in New York. I've told some of my Giant fan friends that it's not that they don't love him... they HATE him. Some go to the park just to boo him.

They want him run out of town on a rail. Not even traded but brought to LaGuardia in handcuffs and placed on a plane out of the TriState area.

One of my Giants friends said "Fly him here! We'll take him."

Yankee fans and the press seem to be investing in Tar and Feathers when it comes to A-Rod. And ever when he slapped Arroyo's glove, any good will from New York was slapped with it. 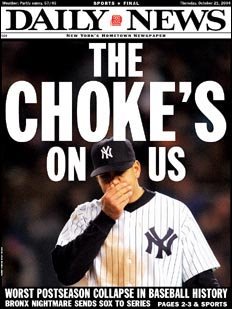 Yeah, his knocking in ZERO runs in the playoffs, his brutal ground out double play in the last inning of the Anaheim playoff series and his being buried in the 8th spot justifiably warranted criticism, even booing.

But even when he does something RIGHT, he gets booed.

So far this season he has an extra basehit every single game. He hit a homer opening day.

The next day the Yankees lose in a game where Jeter commits 2 errors and Pettite couldn't give them 5 innings. Who was the villian on the back pages? 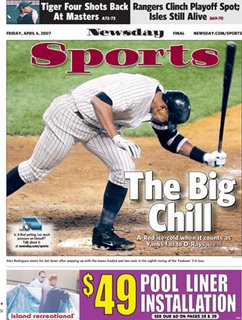 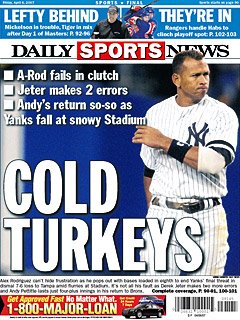 Yup. A-Rod. No mention of his RBI double.

Even when he is honored by the rest of baseball... that's not enough. He won the MVP in 2005 (which he should have come in 3rd to Mariano Rivera and Big Papi, but I digress... he won it.)

So how does the Daily News, his HOMETOWN PAPER, choose to congratulate him?

With a wildly effeminate caricature with an ear ring representing each MVP and an empty ring box. 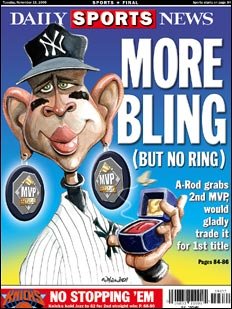 Yeah, his postseason woes are well documented... but did he blow 2 late inning leads against the Red Sox in '04? Or did he not get out of the second inning of game 7 of the Sox series? Did he get CLUBBED in both Yankee post season starts like Randy Johnson?


But it all falls on A-Rod.

And while I was a gleeful A-hole Red Sox fan about it at first, it's now getting silly. 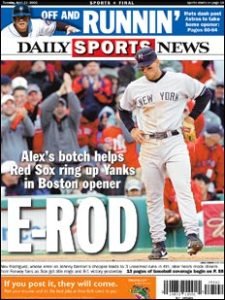 Mike Mussina (ringless) also gets a pass. Despite blowing a big lead in the '02 playoffs and turning the tide to the Angels... bombing big time in the '05 do or die game 5 against Anaheim (Mussina can't pitch 3 and the Yanks are eliminated). And last year blowing a lead to the Tigers and giving them life in a series they should have been swept in. Where's HIS grief?


Yankee fans embraced David Wells as a great winner. And yes, he had some terrific moments, not the least of which was the perfect game, the 1998 ALCS MVP and being part of the best Torre team (that 1998 title winner.) 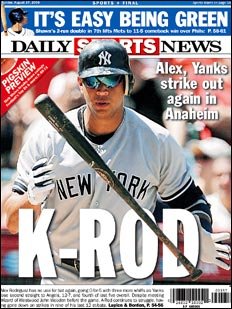 But Wells also had a on the mound melt down that eliminated the 2002 Yankees.
And was too injured (fat) to pitch more than an inning in game 5 of the 2003 World Series... a game the Yankees needed... and lost..

But A-Rod gets the blame.

The Post even compared it to the Babe Ruth trade... not realizing how instrumental he was going to be to reverse the curse. 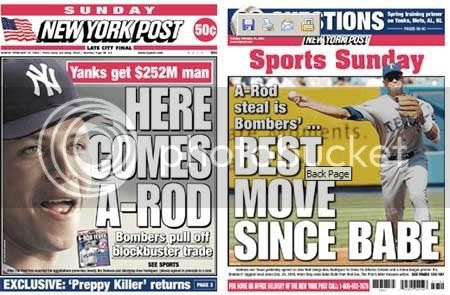 So get ready folks... this is it. The last year of this marriage from hell. Spare me any talk of A-Rod saying "I want to spend my whole career as a Yankee."

This guy appeared in a tux at a press conference when he was declared the captain of the Rangers where he pledged to concentrate all of his attention on making the Texas Rangers winners.

A week later he was a Yankee.

He might be a Giants... or a Dodger... or an Angel... but he will be on the West Coast, in a more forgiving environment... win a World Championship... go the Hall of Fame and his post season failures as a Yankee will be long forgotten (see Dave Winfield).

But as a biased observer, it is going to be a very interesting year seeing this play out in the Bronx.

I just can't wait until he booed after a grandslam.