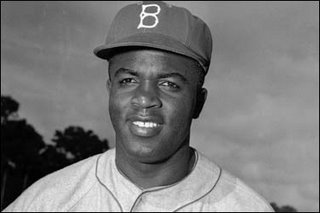 This weekend baseball is rightfully paying tribute to Jackie Robinson and his breaking the color barrier. Some players will wear #42 in his honor and few whole teams will as well.

Former players will come out to speak, great montages will be shown on JumboTrons, and hopefully a few nice words will be thrown towards Larry Doby, who ALSO made his debut in 1947, a few months after Jackie, but never seems to be mentioned. 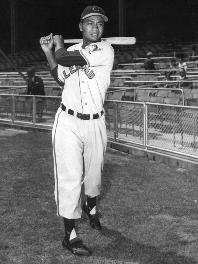 My mind wandered to an article that I read in the New York Times that was pointing to the many reasons why the pitching is so bad and the home run totals were so high. They listed the usual list of reasons that are hard to argue with:
1. Smaller ballparks.
2. Lower mounds.
3. Umpire's squeezing the strike zone forcing pitchers to throw over the heart of the plate.
4. Players digging in with tons of armor.
5. Pitchers not being able to throw a brush back pitch
6. Oh yeah, 'roids and HGH.

But they also listed expansion and the diluted talent pool.

And this is where I take exception and where we go full circle to Jackie Robinson and Larry Doby.

Yes, baseball has expanded from 16 teams in Jackie Robinson's day to 30 teams now. And that means there are 154 pitchers in the big who wouldn't have been there before.

So far no argument from me. But let's not be foolish and call what we have in baseball a thin talent pool. You will NEVER find a thinner talent pool and records more worthy of having a big fat asterix next to them than the "good old days" of Ty Cobb, Babe Ruth, Jimmy Foxx and Joe DiMaggio.

The talent pool from 1901 to 1946 was so insanely thin that it is hard to look at those numbers seriously. It's an element that people don't think about when they talk lovingly of Jackie (and some do for Larry.) It wasn't just an act of social justice... it gave us better baseball!

Think about the explosion of players after Jackie and how many of them are still considered the best ever. Willie Mays? Hank Aaron? Frank Robinson? Roberto Clemente? Ernie Banks? Bob Gibson? Roy Campanella? Juan Marichal?

How many Say Hey Kids and Hammering Hanks were on the outside looking in while Ty Cobb, Babe Ruth and Cy Young piled up records?

And I'm not just concerned about social justice here! I'm talking how the game on the field was inferior!

Let's put what baseball's talent pool was like pre-Jackie in a modern context.

Scale the league back to 16 teams and fill those teams up with players currently playing.

BUT make sure when you pick a catcher, don't take future Hall of Famer Pudge Rodriguez. Nor All Star Victor Martinez. Nor multiple playoff and World Series hero Jorge Posada. Or anyone named Molina.

Pick a first baseman... but for Godsake NOT Albert Pujols, or Ryan Howard, or Big Papi Ortiz, or Carlos DelGado, or Adrian Gonzalez.

Third base? Go ahead! Pick anyone you want... except A-Rod... and Aramis Ramirez... and Miguel Cabrera... and Melvin Mora... and batting champ Freddy Sanchez... and Adrian Beltre...

Now pick an outfielder. Ooo sorry, not Carlos Beltran... nor Andruw Jones... nor Manny Ramirez... nor Jermaine Dye... nor Vlad Guererro... nor Bobby Abreu... nor Vernon Wells... nor Ken Griffey Jr... nor Carl Crawford... nor Barry Bonds.... nor Gary Sheffield... nor Alexis Rios... nor Torii Hunter... nor Magglio Ordonez... nor Carlos Lee... nor Curtis Granderson... anyone else though! Oooo, sorry not Garret Anderson either.

That's just the elite players.
Put teams together without them and you a laughably thin talent pool.

Now the pitchers would like to see those players out of the game for the sake of their ERAs. But let's put that pitching staff together.

You weren't thinking of bringing in Mariano Rivera nor Francisco Rodriguez from the bullpen were you? Shame on you! 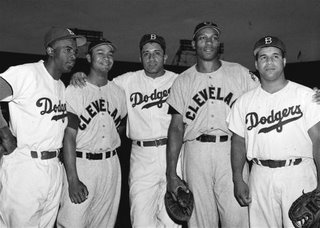 Now talk to me about a thin talent pool.

And yes there are more roster spots to fill in, but there are also new avenues of which to fill them!

Just this Wednesday, one of the most anticipated match ups in recent memory for an April game took place in Boston. The Red Sox Daisuke Matsusaka facing off with his old rival Ichiro Suzuki. The surprising hitting star turned out to be Kenji Johjima.

Oh yeah, the real star of the game was Venezuelan born King Felix Hernandez... also, keep your eyes off of HIM if you were picking a pre-Jackie team.

Expansion of the teams has meant expansion of the net to find players. What are the Yankees' two most critical injuries this year? The injuries to Taiwanese pitcher Chien Ming Wang and Japanese slugger Hideki Matsui.

How many Wangs, Matsuis, Ichiros and Dice Ks were in Asia during the pre Jackie days?

Jackie Robinson integrating baseball was of course a wonderful and important moment for Civil Rights in America. But let's face it... it made the game BETTER!

Thanks for the deep talent pool Jackie!