A-Rod is a genius 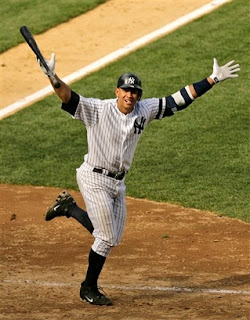 A few weeks ago I wrote about the A-Rod
insanity... how the New York media and fans were just salivating at the
prospect to boo him... and how this would inevitably lead to his
bolting at the end of the year.


Man, what a difference a few weeks make!

The
predictable story line has transformed into the greatest start any
player has ever had... maybe ever... and a spectacular exit strategy is
in place.

A-Rod has won games on his own... and when they lose close, don't blame him! He homered once or twice.

And
yeah he's saying all the right things about "wanting to stay in New
York" and "I've always wanted to be here." But what is he supposed to
say?

"I was looking for a condo in Anaheim, but with the money
that Arte Moreno is going to give me, I can afford to buy the castle in
Disneyland and make thatCasa Del A-Rod."

Remember his appearing in a tux in the off season of 2003 proclaiming his commitment to making the Rangers a championship team? By the time he returned the tux to the Men's Wearhouse, he was a Yankee.

He's going to bolt and Scott Boras will start the bidding at $30 million a year... and A-Rod will have a year to justify it. Think the Cubs with their new management, the Angels with Arte Moreno or the Giants starting the post-Bonds era won't be drooling over him?

And what about his post season failures?
With this pitching staff, it won't really be a problem. Watch the Yankees miss the playoffs all together and A-Rod be able to say "Don't blame ME!"

Even the New York press can't get on him anymore... and I am guessing to the secret delight of A-Rod... they have turned their knives on the very people who were considered infallible at season's start.

Torre? Not motivating the team.

Jeter? Screwing up in the field.
Rivera? It might be over. 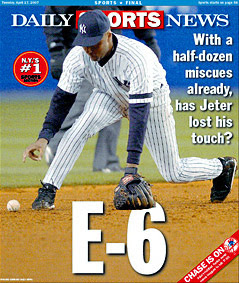 Who would have guessed A-Rod would be the most beloved of those 4?

He's going to get New York to love him... and he is going to bolt... and all the people who wanted him run out of town on a rail will be calling WFAN screaming "HOW COULD THEY LET A-ROD GO! HE WAS A TRUE YANKEE!"

He's a genius. He has turned the media and fans around and they'll never know what hit them when he comes back to Yankee stadium in a visiting uniform.

Man, there has been a genuine twist in this story and it isn't even May yet!

This is better than Grey's Anatomy
Posted by Sully at 2:53 PM