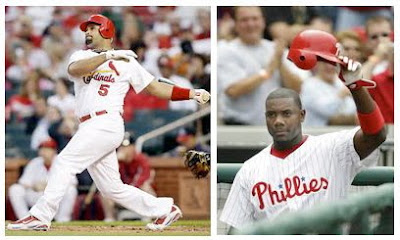 1. It's a good old fashioned blockbuster deal that will put a spark in Spring Training!

Seriously, is this a Fantasy Baseball trade? I mean this is a deal I would make in June when the Fantasy League is getting stale and I think "Heck, let's shake this up!"

It's not a salary dump... it's not a Johan Santana like "deal away a superstar for spare parts" fiasco. It's not a "We need to get Manny Ramirez off the team" trade. It's a pair of contenders swapping former MVPs, former NLCS MVPs and guys who have delivered a World Series title to their home towns. We don't see enough of these trades.

The Phillies have too much left handed hittting... throw Pujols into that line up and not only will it be more balanced, but he'll see quite a few more fastballs.

Put Howard in St. Louis with Matt Holliday batting behind him and you'll have the deadliest lefty/righty combo in baseball.


3. It will add a nice plot turn in Albert Pujols' legend

As I wrote the other week, Pujols doesn't owe the Cardinals nor their fans anything. They've had MVPs, playoff heroics and a World Series title with Albert in the lead. He could play the next 10-11 seasons in St. Louis, pile up numbers and work on his Cooperstown speech.

OR he can bring his act to a new city and give him some new challenges. Maybe it will be like when Pete Rose came to the Phillies... or Mike Piazza, seemingly a Dodger for life, brought his legend to Queens (by way of the Marlins) and will probably go into Cooperstown with a Mets hat.

Sure Pujols can be a Cardinal forever and be fawned over by the passionate yet friendly Cardinals fans... or he can jump into the cauldron of the Northeastern baseball and be loved in two different cities.


4. It is an ideal place for Ryan Howard

Ryan was born in St. Louis.
He grew up rooting for the Cardinals.
He went to High School at Lafayette High in St. Louis County.
He went to college at Missouri State University.

He was born to play for the Cardinals. And yes, he is replacing a beloved legend... but Cardinal fans are loving fans (just ask Mark McGwire.) And a few bombs into the right field seats will have Cardinal fans saying "Welcome home!"


5. It will embolden every yahoo calling up WFAN and XM Radio with trade theories

You know those guys who call up, especially late at night, to sports talk stations? They usually have outrageous trade proposals. Usually it is something like "I think the Mets should trade for Derek Jeter... maybe we can send them Luis Castillo, Daniel Murphy and some prospects."

And then Steve Somers would shoot them down.

But now whenever someone has a crazy trade proposal that is dismissable, they can reply "Hey! You never would have thought the Pujols for Howard trade would have happened!"

Yes, it is a good thing to give those looneys some ammo... it makes listening sports talk radio so much more interesting!


Now this trade is probably not going to happen. For what I understand it was an internal conversation among Phillies scouts... and who knows? Maybe some scouts left a spring training game and wandered over to Meg O'Malley's bar in Melbourne Florida, and got hammered.

And one of the scouts just blurted out "Heck, why don't we just trade Ryan Howard for Albert Pujols?"

Next thing you know it is front page news.

It isn't going to happen.
But it would be cool if it did.