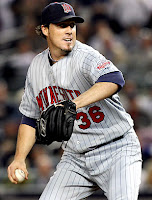 So Joe Nathan is hurt and could possibly miss the 2010 season?

Isn't that a fine "Good Morning" for Twins fans every where. Nathan has given the Twins 7 terrific seasons, but closers (with the exception of the Mariano Rivera and Trevor Hoffmans of the world) tend to flame out after... well... 7 or 8 years.

You can look it up.

So here are the Twins, going into their new park and hoping to sign Joe Mauer to an extension and win another Division Title with their highest payroll in franchise history... and $11 million of their payroll might be in the trainers room.

Sure they have Jesse Crain, Jose Mijares and Matt Guerrier in their bullpen... and who knows? Maybe one of them can take over the 9th the same way Nathan replaced Everyday Eddie Guardado. 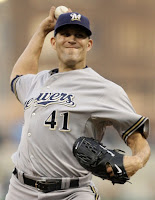 He is supposedly close to resigning to the Brewers... but he hasn't yet. And he's still available and at THIS point, he probably isn't going to be that expensive.

I am sure he wants to be a starter and he went 14-7 last year with Milwaukee.

But he also led the league in earned runs, home runs and had a nice fat 5.22 ERA to show for his troubles.

He has some closer experience, has a pair of World Series rings and I am sure wouldn't mind pitching for a contender in 2010.

It makes sense to me... which is probably why it won't happen.