You keep telling yourself that, Frank McCourt 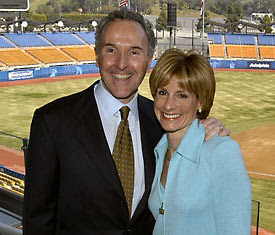 I am always fascinated when a public figure says something that everyone on the planet Earth knows is Bullsh*t and acts like we're going to buy it.

Maybe it is the whole Clinton "I did not have sexual relations with that woman" fascination.
Or hearing Pete Rose say he never bet on baseball all of those years.
Or Clemens, Bonds, McGwire and Palmeiro saying they never used 'roids.
Or hearing how happy James Cameron is for Kathryn Bigelow.

So the latest "Does he really think we are buying it" moment has to come from Frank McCourt. (No not the Angela's Ashes guy... the other one.)

The other McCourt... the one who owns the Dodgers... claims that his messy War of the Roses like divorce is not affecting the Dodgers.

Of course it isn't... it certainly did affect how the Dodgers did business this off season. The team, which has fallen 3 games short of the World Series each of the last two seasons, desperately needs an ace pitcher. The Dodgers have lots of young talent with big league experience... and Roy Halladay and John Lackey switched teams as did Cliff Lee twice.

Did the Dodgers ever figure into those moves? Nope.

Oh yeah, Manny Ramirez is clearly in decline and now sulking, and the Dodgers made no attempt to beef up the lineup either.


And did I mention the Los Angeles Dodgers, the marquee team in the second biggest media market in the country, has a lower payroll than the Minnesota Twins?

And this retreat just HAPPENS to be taking place while the owner is in a nasty split that could cost him $1 million a month.

If the Dodgers fall a pitcher or a bat short of the World Series again this year, then you can talk to the McCourts... who will no doubt be lying in their foyer with their chandelier crashed around them.