Did you ever have a tooth ache that you couldn't resist poking at with your tongue?

Ever have the urge to taste something that you know will be terrible?

I am sure some of you clicked on "Two Girls One Cup" knowing full well it was going to be gross.

Sometimes we are drawn to things that we KNOW are going to suck. Hell, I remember when I saw the trailer for Lady in the Water I remember thinking "Oh man, I HAVE to see it." And it didn't disappoint in its transcendent awfulness.

Well folks that's what is going to be happening with the Mets this season.

This isn't exactly a new stance for me. I've been calling for the Mets to dismantle since January.

The Carlos Beltran knee fiasco and the bringing in of Gary Matthews Jr and Kelvim Escobar (not to mention the parade of players who said "thanks but no thanks" to the Mets offers) made me realize this injury plagued veteran team is going into 2010 with MORE veterans who are injury prone.

Met fans who disagreed with me said they still have Reyes, Santana and Wright and that's not a bad foundation.

That was before this whole bizarre thyroid condition that could keep Jose Reyes out for a while.

Oh yeah we are being told that it is only 2 to 8 weeks.

After the whole Carlos Beltran knee fiasco, the Mets are clearly a good source for guessing recovery times. 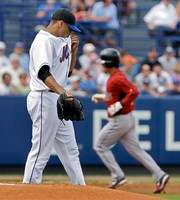 And Johan Santana got rocked in his first game back from injury. Now yes, it is a spring training game and normally I don't put much stock in what is essentially a practice game.

But he is coming back from injury... and what if this is the beginning of a decline?

He's had 6 great seasons, a pair of Cy Young awards and looked like he was Hall of Fame bound... and he very well might be.

But what if he is a Bret Saberhagen, Frank Viola, Orel Hershiser, Fernando Valenzuela, Dave Stewart or David Cone type. A guy who dominated for a stretch but not long enough for a Cooperstown career.

As Santana goes into his 30s, if he is anything less than dominant, then the Mets rotation will be 5 question marks. 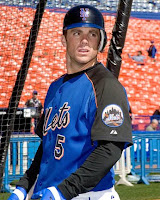 And David Wright showed that CitiField wasn't exactly the best place in the world for a right handed power hitter to play (something Jason Bay probably should have looked into.)

And without Beltran, Reyes nor Delgado in the lineup, why on Earth would he see a fat pitch to hit all year?


Toss in the fact that the front office is in perpetual turmoil, management that is still counting their pennies after Bernie Madoff made his way with the owners, a manager that just seems happy to be employed and having the biggest baddest baseball team in the world across town.

Forget playoffs... does any team really see this as a .500 team now?

They have no shot at the Division title. That is Philadelphia's to lose.
As for the Wild Card, would you honestly pick the Mets over the Marlins? The Brewers? The Dodgers? The Rockies? The Diamondbacks? The Giants?

Remember this is not a team that just missed the postseason last year... this is a 92 loss team that got WORSE!

They are more likely to lose 100 games in an empty CitiField.

This team reminds me of the post Messier Rangers and the Isiah Thomas era Knicks. Both teams got old, but the front office kept signing big priced players because "New York needs stars and won't tolerate a loser."

In came Fleury, Lindros, Kovalev, Jagr and Holik to the Rangers. They were expensive, the Blue Shirts missed the playoffs every year, Madison Square Garden was empty and nobody cared.

And of course the Knicks brought in Marbury, Curry, Rose and Francis... and the team became the laughing stock of basketball.

Ask the MSG network how their ad revenue was during that era. I am guessing not that good.

The Rangers didn't get to be relevant again until they decided "heck, let's just play young guys."

The Knicks are nowhere near relevant and their sole plan seems to be "Hey! We'll sign LeBron James!" (If King James stays in Cleveland, there is no plan B at the corner of 34th street and 7th Avenue.)

So that's where the Mets are headed. They already are old expensive and irrelevant. But they are on the express track to being that gruesome YouTube video that you dare your friends to watch.

I would say "blow the team up" but the problem is it already has blown up... the Mets just don't know it yet.